The presentation of the much awaited new iPad started with Tim Cook entering the stage to talk about Apple’s success, the new iOS, Siri being introduced in Japan, and the new Apple TV, before finally introducing the new iPad 15 minutes into the event. “That brings us to iPad. We think the iPad is the poster-child of the post-PC world. It has surprised virtually everyone.” “We’ve sold almost 15.5 million iPads last quarter alone. We sold more iPads in the last quarter alone than any PC manufacturer sold in their entire PC line worldwide,” said Cook while displaying statistics in the background showing the leading iPad market share on Personal Computer Units Shipped compared to HP, Lenovo, Dell, and Acer.

(You can now watch the whole presentation on video)

“iPad is showing up everywhere in the daily lives of people. Now, when we set out to create the iPad, we set out to create not just a new product, but a new category. And we said in order to do that, the iPad had to be the best device for doing some of the things that you do most often; things like browsing the web, checking e-mail. This is a tall order, but when we ask the iPad users, they told us that’s exactly what we had done. When we ask iPad users who had a notebook, desktop, and smartphone what their favorite device was for e-mail, they responded: iPad, for browsing the web, they said iPad, people also said iPad for e-readers and gaming devices. For so many activities, they responded iPad. Part of the reason is the incredible bundled apps with iPad, the over 200,000 apps as well.
These apps are gorgeous and groundbreaking, they help you create, learn, or do almost anything. Great educational apps, business apps, incredible games. You won’t find these incredible apps on other tablets. In the 100+ tablets that came to market last year, you won’t find that great experience,” Cook would pruodly proclaim. “Who will come out with a product that’s more amazing than the iPad 2? Stop wondering; we are! Today announcing a new iPad: we’re taking it to a whole new level and redefining the category that Apple created with the original iPad,” said Cook before Phil Schiller started talking about the new iPad.

“For the first time, an iPad has higher resolution than this entire display behind me! Everything looks stunning. Photos will look amazing. Text will be sharper. The new iPad display is 2048×1536 pixels. If you do the math, that’s over 3.1 million total pixels. 264 pixels per inch is enough to call it a “retina” display,” said Schiller. “And yes, there is real math behind this – scientists agree with us,” he continued to a laughing audience. “The new iPad also has 44% greater color saturation. The iPad 2 used the A5 chip, but we needed even more horsepower, so we’ve created the A5X chip. Quadi-core graphics designed specifically for the retina display. Next up is the new iPad cameras. In the new iPad, this is a great iSight camera. 5MP backside illuminated sensor, 5 element lens, hybrid IR filter, Apple ISP. iPad camera has auto exposure, auto-focus, auto face detection, auto exposure lock and autofocus lock too. HD video recording is now at 1080p resolution. Full HD resolution if you want to grab videos.”
“You can now type or tap the microphone and dictate what you want to say. New iPad supports English, British English, Australian English, French, German, and Japanese.” “This new iPad has the most wireless bands of any device ever shipped. New iPad has next-gen wireless: LTE. iPad 2 supports EVDO, HSPA. But new iPad has a great deal more: HSPA+ and DC-HSDPA. And now topping it off with LTE, with a (theoretical) maximum 73 Megabits per second download. iPad 4G will work with Verizon, AT&T, Rogers, Bell, and Telus (US and Canada) with two versions of the new iPad: LTE for AT&T and LTE for Verizon because they use different bands. They’re also completely compatible with 3G worldwide.”
“New iPad will be priced at $499 (just like the present iPad 2) for the 16GB model in the US, with $129 more for 4G. The New iPad will be released and in stores March 16, but is available for pre-order right now,” said Schiller before giving a video presentation of the new features of the iPad and the many new apps it will come with. 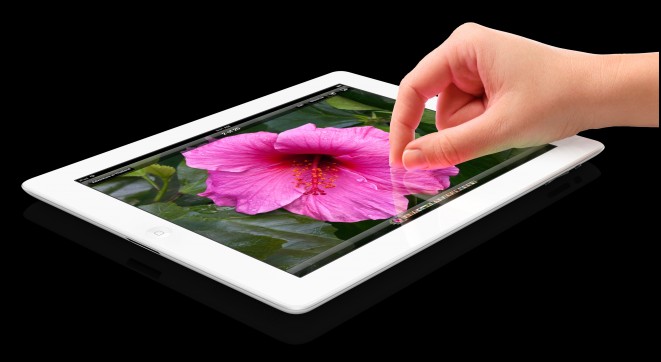 What left everyone wondering and guessing until the end, was the name for then new iPad. But nobody from Apple called it anything else than “The New iPad”. And here are the iPad 2 vs. “The New iPad” features that are new: New iPad has retina display, A5X quad-chore chip, iSight camera, 1080p video recording, voice dictation, and 4G/LTE. The new retina display means over a million more pixels on your iPad than on your HDTV. The New iPad can act as a personal hotspot for up to 5 devices. New iPad Battery life 10 hours on 3G, 9 hours on 4G. Sketchbook Ink, a vector based drawing app, smart browsing, multitouch editing, pro-level effects, brushes, photobeaming between devices, optics sensor from iPhone 4S.

This is the rest of the highlights from the presentation on March 7:
“We have a great morning planned. I’d like to get started by talking about the post PC revolution.” “We have three post-PC devices: the iPod, the iPhone, and the iPad, the revolutionary device that defined a whole new category. It’s outstripping the wildest of predictions. The momentum has been staggering. We sold 172 million post PC devices, 76% of revenues. In many ways the iPad is reinventing portable computing, and it’s outstripping the wildest of predictions,” Cook said. “It plays to our strengths, it’s what we love to do. First example of that we’re getting is retail stores. Lots of happy people chatting, playing with gadgets,” Cook said before showing the Grand Central store in NY. Tim Cook then went on to talk about iOS and Siri: “Siri running on the iPhone for us, Siri is your best friend, your intelligent personal assistant who gets things done just by asking. It’s a whole new way to interface with your phone. Today we’re bringing Siri to Japan. Siri in Japanese is part of iOS 5.1, available today.”