Onda have launched a new dual-OS tablet called Onda OBook 20 Plus which is an inexpensive new 10.1-inch Windows 10 + Remix OS 2-in-1 tablet with detachable keyboard for $179:
http://www.gearbest.com/tablet-pcs/pp_443418.html

That’s for a tablet with a 10.1-inch screen featuring a Full HD 1920 x 1200 resolution display, a quad-core 1.44 GHz – 1.84 GHz Intel Atom “Cherry Trail” x5-Z8300 processor, with 4GB of LPDDR3 RAM and 64GB of eMMC storage which even supports microSD memory cards up to 256GB in capacity for even more cheap storage expansion and fast file transfer.

It features regular 802.11 a/b/g/n Wi-Fi and Bluetooth 4.0, with both a micro-USB port, a micro-HDMI port with 4K support, and a 3.5 mm audio jack. The battery capacity is 6000 mAh, giving it a 6 1/2 hour – 7 hour battery life. It also has a 2MP front camera, but no rear camera, so at least you don’t have to worry about scratching the back of the tablet when you put it down. 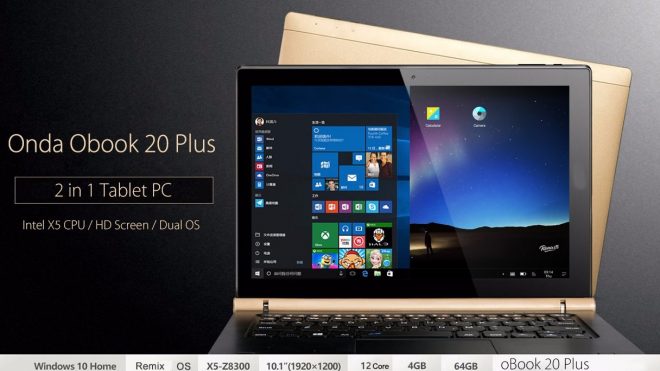 The stylish keyboard is optional

, and just like the tablet, it is black and champagne gold, sporting pogo pin connection between the tablet and keyboard, with magnetic attachment together with two supporting pins that keeps it in place. The keyboard also adds a full-size USB port, so you can connect a mouse, or any kind of useful USB accessory. 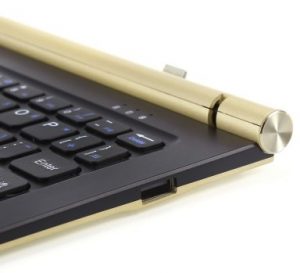 That way Remix OS offers a PC experience but through Android OS and apps, so that you’ll have multiple windows on the desktop, taskbars, ordinary Windows-like folders, etc.

So, with two productive operating systems, a detachable keyboard with touchpad and support for a mouse, some decent CPU and RAM, this looks like an interesting tablet for someone productive.

And a fun tablet for others too because of the price.