Samsung officially launched their latest addition to storage solutions yesterday with the launch of the new Samsung Pro Plus and Evo Plus memory cards, which starts at an entry price of $6.99: https://www.amazon.com/SAMSUNG-Plus-SDXC-Full-SC32H/

The Samsung Pro Plus is a SDXC/SDHC memory card with a read speed up to 100MB/s, and write speeds of 90MB/s in SDXC and 60MB/s in SDHC.

Samsung Evo Plus has transfers speeds up to 100MB/s in both SDXC and SDHC. 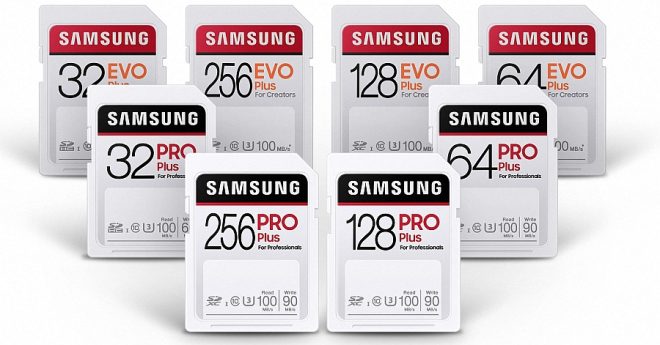 All SD cards are U3 Class 10 rated, so all but the smallest 32GB and 64GB Evo Plus cards will record 4K UHD video. The 32GB and 64GB Pro Plus cards have not been released yet, and won’t be launched before November 8.

Samsung has one of the leading market positions with their memory cards and other external storage solutions, owing to the reliability and generally good reputation. Most of their units have been more expensive than the ones from other leaders, such as SanDisk, Lexar, PNY, and Toshiba, but as we can see with Samsung’s newest memory cards, their price has dropped to a level where they can compete with less reliable memory cards.

Samsung’s fastest microSD cards meanwhile are their UFS memory cards with up to 500MB/s read speeds.