Just as the new Alexa powered Amazon Echo Show was unveiled today, news about Microsoft’s own step up in the same field was leaked through The Verge. 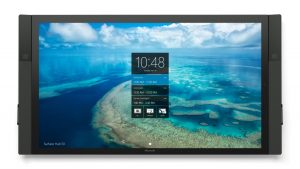 It’s thought of as an evolution of Cortana, and is currently referred to as Microsoft Home Hub, which distinguishes it well from the Surface Hub, a more business geared collaboration hub for large organizations and businesses.

The Microsoft Home Hub is built more for home tasks then, extending what Cortana can already do, such as make notes, set alarms or add appointments to calendars, answer calls, run apps, and look up voice enabled searches.

So the Home Hub can also be used to share calendars with an entire family, control even more smart home technology, smart technology in general, and share desktops as The Verge believes. But whereas Amazon Echo Show is its own device, Microsoft seems to want every Windows 10 device to be able to perform the same tasks.

The Amazon Echo Show that was launched today, is the “Amazon Knight” project that leaked in May 2016, and while the central feature is voice activated control, it does feature a 7-inch tocuhscreen that can optionally be used to control the features with too.

The Microsoft Home Hub probably won’t be with us until after the summer, so until then, here is Amazon’s video of the new Amazon Echo Show from earlier today.