It may be the day after Cyber Monday today, but it’s also December 1st, which means that pre-Christmas sales are far from over, at least if you don’t mind daily Microsoft deals.

Starting today, Microsoft has two weeks of Microsoft deals, in what they call 12 Days Of Deals that lasts all the way until December 12th. Every day sees a new deal on a product or service that has some Microsoft technology to it, or that works well as an accessory to such products. Every new product in Microsoft’s 12 Days Of Deals becomes available every day at 12AM (PT), with these Microsoft deals being available in both the US and in Canada.

And December 1st starts with a laptop sale on HP Pavilion x360 Convertible (model 13-s192).
This is a revolving 13.3-inch laptop with touchscreen and 64-bit Windows 10 Home edition. It’s called 360 because the touchscreen revolves all the way around so that it can be slammed together underneath the keyboard, or set up in a tent mode. The tent mode comes in handy since this cheap laptop has a touchscreen.

The HP Pavilion x360 laptop sale is on a Signature Edition, which means it only has a clean Windows 10 installation and no annoying trialware. The laptop sales price is cut to $499 in the US, while it’s cut to $679 in Canada. 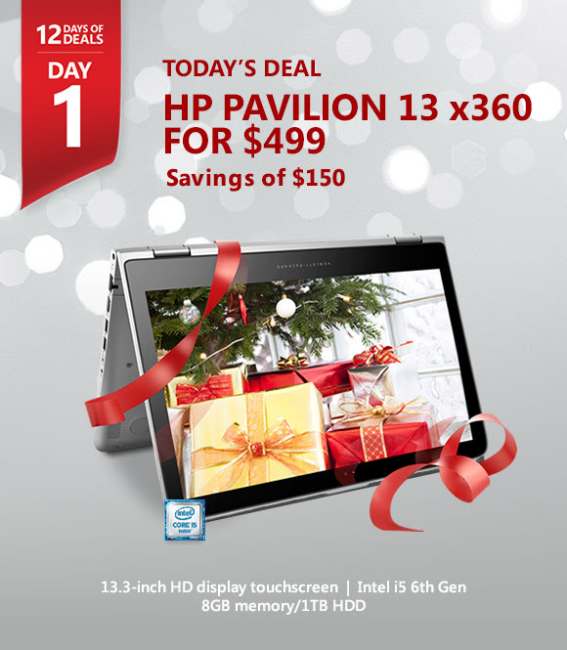