The crowdsourced Surface Pro rival Eve V will finally be released for regular purchase on December 4, starting at $799.

It has taken some time to go from crowdfunding to launch, but at the same time, Eve Tech have rooted out a some real problems during the process instead of identifying those problems after launch instead, one of which was the experience of a display that developed a yellow hue over time, getting Eve Tech to switch display supplier.

So Eve V is a kind of mature and refined device already, where the details have been thought trough by use and feedback from the crowdsourcing community. The specs are also generally high, but it has one important downside at the moment, though Eve Tech may be able to fix this at some point, and that’s obviously the processor which is now lagging behind the rivals that have either been released this year or that will be released soon in the same 12-inch Windows 10 2-in-1 category.

The processor options are Intel Core m3-7Y30, i5-7Y54, and i7-7Y75 processors, aka Kaby Lake processors. So compared to the latest Surface Pro with Intel Core i7-7660U processor, the top model of the Eve V has a 27% lower Geekbench 4 single-core score, and 39% lower multi-core score.

But at least the Eve V is a little cheaper, with something like the Intel Core i5 model with 8GB RAM and 256GB storage being $100 cheaper than a Surface Pro, though it has an older processor.

But the rest of the specs are good, as it features a 12.3-inch Sharp IGZO display with 2880 x 1920 resolution and Gorilla Glass. It also has a N-Trig 1024 pressure sensitive digitizer.

It also has a fingerprint sensor for secure login, and a built-in kickstand.

This is the second tablet from Eve Tech, after an 8-inch Windows 10 tablet that first kickstarted their success. So unlike a lot of first time manufacturing crowdfunded computer projects, we should expect future support from the company. 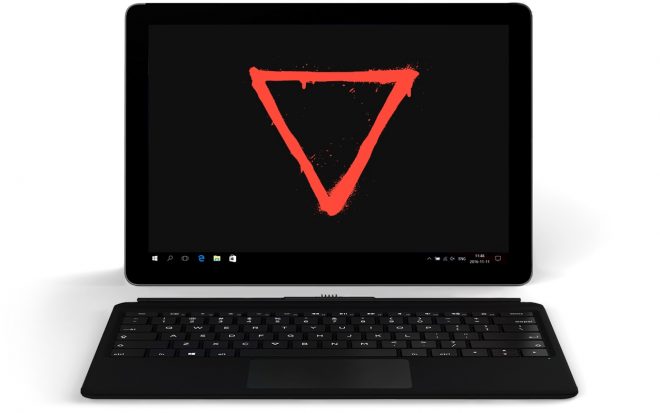