Cyber Monday tends to have the great sales on computer technology overall, and 2016 is evidence of that. So there are quite a lot of Cyber Monday tablet deals that will end in a couple of hours, with ongoing flash sales until then, but there’s also a lot of other related Cyber Monday computer sales today.

Sure, the Surface Pro 4 and Surface Book have been in the spotlight a little bit, but there are other good deals today too. Like the 12-inch Intel Core i3 Acer Aspire Switch Alpha for $449, or the Asus transformer Mini 102HA for $299. 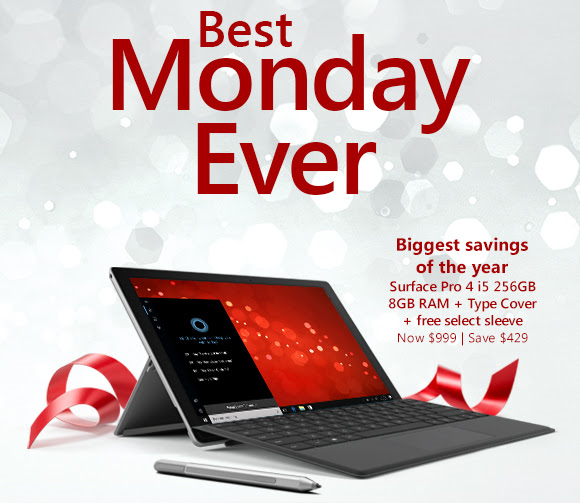 But Cyber Monday laptop deals are in abundance today, although they have an tendency to sell out fast. But Windows 10 laptops from Asus, Dell, HP, Alienware, Lenovo, Razer, MSI, Vaio, are all enjoying Cyber Monday sales, ranging from smallest 11-inch notebooks to regular 15.6-inch and 17-inch laptops on sale with both Intel Core Skylake and Kaby Lake processors and even up to 32GB of RAM on actually several of the most powerful laptops in the market right now.

There are a few monitor deals too, ranging from small flat monitors to cutting edge 4K resolution curved displays from Dell, Lenovo, Acer, HP, and Samsung.


There are sales on anything from the smallest PC sticks to the largest AIO computers and desktops, and in Windows phones Microsoft is giving away a free Lumia 950 phone to customers of the Lumia 950 XL.

And there’s sales on Xbox consoles, games, software, and anything you can either plug into a tablet or computer or connect to wirelessly, from drones, to fast Wi-Fi routers, to Bluetooth speakers.