Amazon’s annual Prime Day event is about to start, and will be held for 48 hours from Monday June 21 through Tuesday June 22.

And it offers an opportunity to save a little money on some tablets, tablet accessories, or other types of computers and computer gear, especially now that Amazon says this will be their largest Prime Day event ever held with sales on over 2 million products in 48 hours.

(UPDATE 2: Apple’s hot new mega powerful M1 powered iPad Pro is $50 off in a one and only event. The waterproof and rugged tablet Samsung Galaxy Tab Active3 has now been added to the sales list too, with 20% off.) 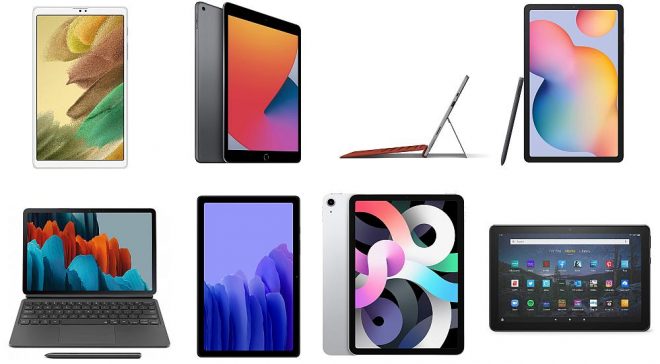 In another Prime Day preview, Amazon has also stated that computers from Asus, LG, and Acer will be discounted on Prime Day 2021. But some of the tablet sales have already started, and here they are.

The extremely popular Samsung Galaxy Tab S6 Lite 10.4 which has since been updated to Android 11, is on sale $70 off with digitizer pen included.

The even more impressive and very powerful Apple iPad Air 10.9 is cut to a record low $519 for Prime Day, so that’s a good tablet deal.

Surface Pro 7 models also benefit from an extra price cut, with 15% off the most popular 8GB/Intel Core i5 models.

2021 Prime Day deals on Samsung’s flagship tablets Samsung Galaxy Tab S7 and Tab S7+ will fluctuate through Prime Day, but the basic price cut from the original MSRP starts with $100 or 15% off. Though some storage options, or some bundles may see additional price cuts, so these are tablets worth keeping an eye out for on Monday and Tuesday.

And despite being a bestselling tablet computer, the 10.4-inch Android tablet Samsung Galaxy Tab A7 is once again on sale for $179, which makes this one of the best tablet deals for Prime Day.

The newest tablet to be released on the market is on sale too, even if it has barely started shipping in the US yet, and that’s the brand new 8.7-inch Samsung Galaxy Tab A7 Lite. It’s just $10 off, but at least that means it starts at $149 for Prime Day.