Tablet stands that will hold your tablet computer for you on a desk, table, in bed, sofa, chair, or elsewhere, can sometimes be made by yourself. If you have a shoe box or some solid cardboard lying around, you may even be able to cut one yourself. Cheap as it may be, it may not end up looking all that pretty though, and compared to the cheap tablet stands out there, you’ll probably lose out on a lot functionality too.

So here’s 5 new tablet stands that’s been launched the last couple of weeks, and that are becoming popular bestsellers.

Srmate Gooseneck Tablet Stand
A tablet stand that can fit anything form the smallest tablet computes to the larger tablets at up at 12.9 inches, and offers the advantage of having an almost infinite number of viewing angles from which you can view the tablet, as long as you have an inch or two of surface to attach the feet to. 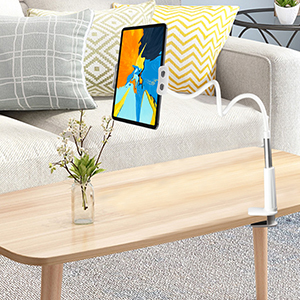 Elitehood Tripod Stand
This is the type of tablet stand that can rise all the way from the floor, which is sometimes necessary if you haven’t got a fixture to set a tablet stand on. While it has a tripod foot, it’s still a good idea to take any potential dogs in your household into consideration if they have the cute habit of knocking things over when they run around with all their enthusiasm. Unless of course the tablet on top of the stand is an Amazon Fire Kids tablet with free replacements when their screens break. 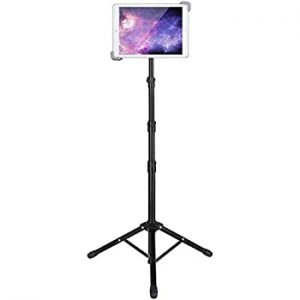 AboveTEK Kitchen Tablet Stand
A new and more advanced tablet computer stand that enables it to be hung on the wall, from an overhead position, or placed on a counter. It’s also pretty nimble and portable since it can be folded. 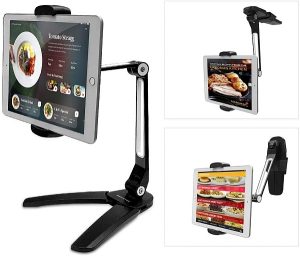 Saiji Phone And Tablet Stand
A simple new desk stand for both tablets and smartphones where the stand can tilt 70 degrees and rotate 360 degrees. It’s the most popular in black. 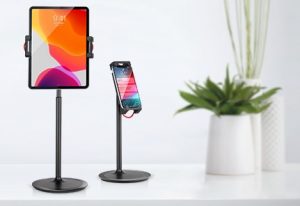 Universal Desktop Phone And Tablet Stand
This brand new tablet stand for desks and tablets has a wide and sturdy foot and a silver finish. Being simple and straightforward, it doesn’t cost too much. 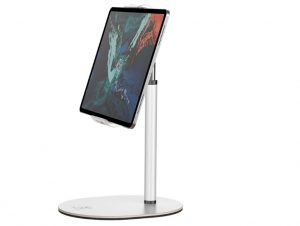