Microsoft Store is competing with other computer stores and perhaps also clearing out some inventory before they stock up on the new fall releases in October and November, and that means a couple of end of September computer and tablet deals: https://www.microsoft.com/en-us/store/collections/pcdeals/

The most eye-catching sale is the 8-inch Windows 10 tablet NuVision TM800W601L which is back on sale for $49. NuVision have had similar editions of this tablet on sale before, with many months in-between. So with that price, it becomes something of a Amazon Fire 7 alternative, since this is actually a 2GB RAM tablet with 32GB storage, 1920 x 1200 resolution, powered by a Intel Atom x5-Z8300 processor. At 275 grams, it’s more than 30 grams lighter than the 7-inch tablet from Amazon too.

A 10.1-inch version of the tablet is on sale for $89. And the Microsoft Surface Book alternative Porsche Design Book One is also on sale with $500 off.

But the September sale is mainly on Windows 10 notebooks, laptops, desktops, and AIO’s so far, ranging from the the 27-inch 4K Intel Core i7 powered HP Envy 27 with Nvidia GeForce GTX 950M GPU and 16GB RAM, to something like 11.6-inch convertible notebooks with Intel Celeron processors for $199. 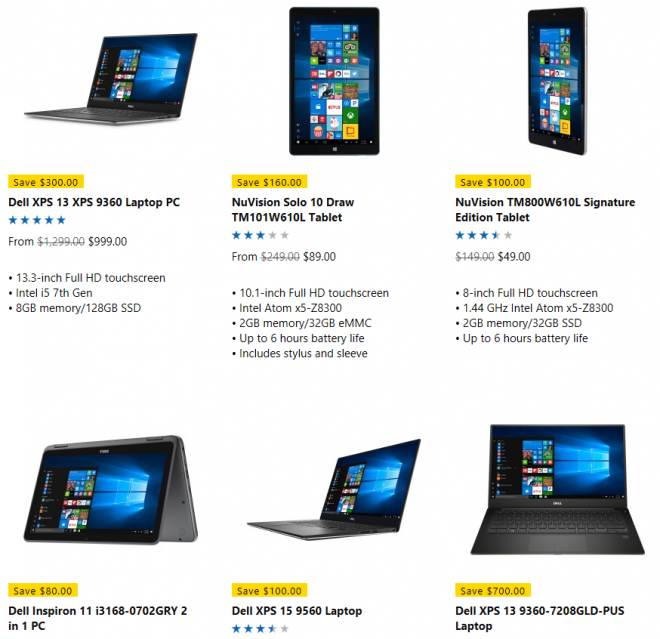