Just a few days after Black Friday and Cyber Monday, comes the final chance to score a tablet deal before Christmas, or any other related sale in computers, Xbox, games, VR, phones or related mobile technology and accessories this December: https://www.microsoftstore.com/store/msusa/en_US/cat/12-Days-of-Deals/

There are two 12 Days Of Deals, with the main one being the Microsoft 12 Days Of Deals 2016 sales, with new deals every day, starting on Monday, December 5th and lasting until December 16th. But there’s also a general 12 Days Of Deals sale on Amazon too, but Amazon’s December sale which starts on December 4th, doesn’t cover just computer and mobile related technologies, like Microsoft’s sale does.

Microsoft Store meanwhile will have both online and offline sales this December, with doorbuster deals offline, and online deals that starts fresh every day at midnight – 12AM PT. Microsoft Store’s 12 Days Of Deals is available in Canada too.

Monday, December 5.
On the first day of Microsoft’s 12 Days Of Deals, there will be online sales on Intel powered Windows 10 2-in-1’s, tablets, laptops, and other computer sales. Offline sales is on the JBL Flip 2 Bluetooth speaker.

Tuesday, December 6.
On the second day of Microsoft’s December sales, the Windows 10 laptop Lenovo Ideapad 110 goes on sale for $199 online, with the Fitbit watches being on sale offline.

Wednesday, December 7.
On the 3rd sales day, there’s sales on Xbox One games online from $19, and a $50 gift card given to customers of a 12-month Groove Music Pass in their offline sale.

Thursday, December 8.
Thursday should be really good, as Microsoft told us last week that customer of the Surface Book will get a free Xbox One S Console. An additional Surface deal as part of Microsoft 12 Days Of Deals, is on the Intel Core m3 Surface Pro 4 with free sleeve for $649.

That’s the online deal, while offline there’s a $25 gift card given to buyers of a Xbox Live Gold membership.

Friday, December 9.
Then, December tablet deals on Friday, with Windows 10 tablets starting at $49, so the cheapest Windows tablets will go fast, like the 8-inch Windows 10 NuVision tablets. In store, there’s also sales on unlocked Lumia 650 phones for just $79.

Saturday, December 10.
Then the computers that Microsoft deems to be a part of their Windows Premium Collection devices will be on sale as well, while Office 365 Home will be on sale offline.

Sunday, December 11.
Sunday is fun and family time, with Xbox controllers sold with $25 gift cards online, and some Xbox One consoles on sale offline.

Monday, December 12.
December Xbox sales will roll over to Monday as well, with some Xbox One consoles being discounted by $50 while being bundled with 2 free Xbox games, while there’s a simultaneous sale on Xbox accessories and other Xbox games. In store, the first customers will quite simply be given a free $25 gift card.

Tuesday, December 13.
On the second week of 12 Days Of Deals, customers of HTC Vive or Oculus Rift will receive a $100 gift card. And to make sure you will stay fit after Christmas, the Fitbit Charge HR will be on sale in stores.

Wednesday, December 14.
Then towards the end of the December deals, there will be a sale on gaming PC’, with powerful Intel Corr and AMD computers going on sale with up to $1000 in discounts. Offline, there will be some Xbox game titles on sale from $19, depending on what’s in stock at your local store.

Thursday, December 15.
Then the last chance to grab a December sale in laptops will be on December 15, when some Dell PC’s will be cut by up to 40%. But some of the cheapest are on sale today already, with Intel Celeron powered 11.6-inch Dell Inspiron notebooks going for $179 right now.

In stores, things will be interesting though, with the Windows 10 Mobile phone deal on the 21Megapixel Acer Liquid Jade Primo bundle with dock, keyboard, mouse and phone will all be on sale for $299.

Friday, December 16.
And then on the last day of Microsoft’s 12 Days Of Deals, there’s a final Surface sale, with select models of Surface Pro 4 being cut by up to $200 along with a free Type Cover keyboard together with the tablet. Microsoft says the combined value will be up to $359, but we have yet to know what configurations will be on sale. Offline, Microsoft will give the first customers in line a $50 gift card. So grab two Xbox games and get in line early. Before you know it, those games will have paid for themselves. 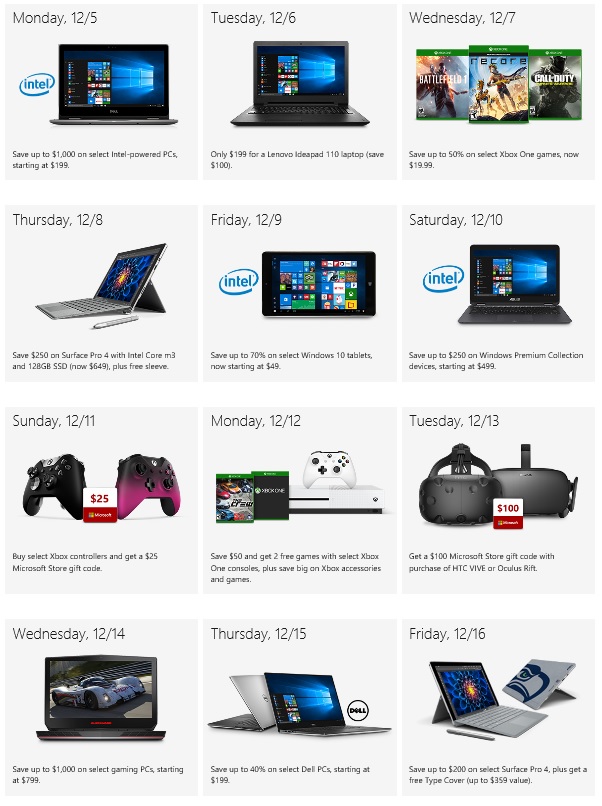 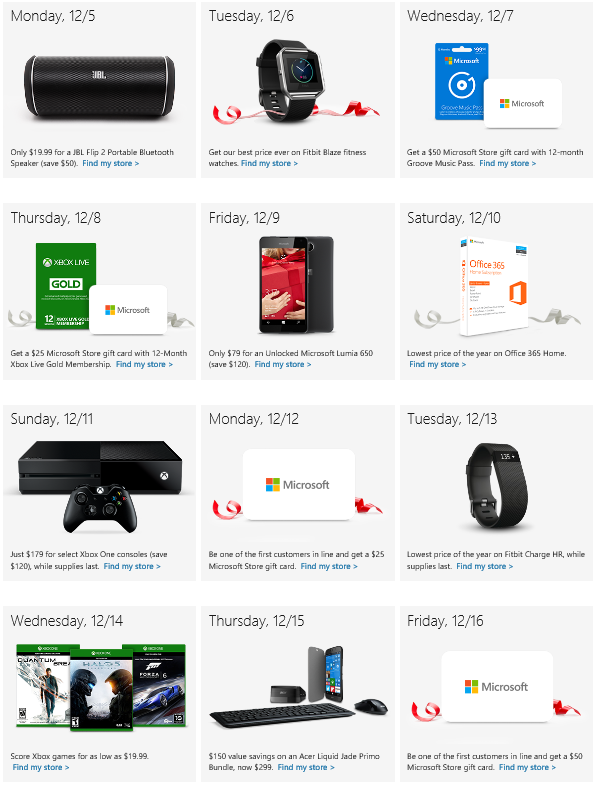