A slight Applegate is currently developing because of the problem with the new iPad Pros bending or breaking too easily, like we wrote about a month ago, after JerryRigEverything demonstrated how easily the thin new iPad Pros can break.

We are not someone for fake news or sensationalist headlines here at Tabletmonkeys, but we were shocked by how easily the new iPad Pros at 11- and 12.9 inches could bend or break under force, which was why we originally wrote about the issue.

The new Apple iPad Pro 11 and 12.9 were released on November 7, so it’s still a new tablet, but a lot of people have had the time to buy it, unpack it, and use it by now, and that has led to even more alarming developments on the story of how easily the new iPad Pros will bend.

The Verge published a story yesterday on this topic of bended iPad Pros and how several owners are now sharing their stories of how their new iPad Pros will not only bend easily after a little everyday use, but that even some new iPad Pros are bent already when they are opened new in the box. 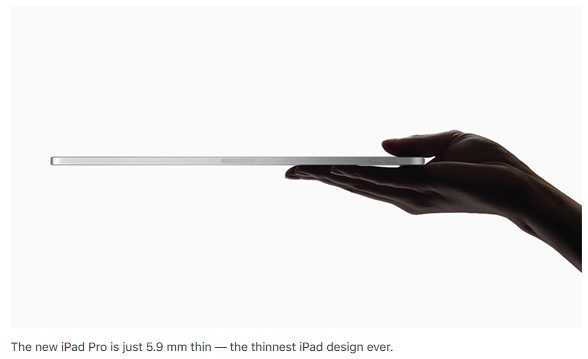 And The Verge says it has had Apple confirm their knowledge on the issue, with Apple reportedly replying that this bend is caused by the cooling process during manufacturing, but that users should not be worried. If you have thought about buying the new iPad Pros, you should definitely read The Verge’s article first.

Apple have yet to release a public statement on the issue, but this problem is severe enough by now to warrant some sort of solution to the issue.

The past iPad Pros didn’t suffer this sort of problem before, but as Apple said during the unveiling of the new iPad Pro 11 and 12.9 (III), the new iPads were reduced by 25% in volume, leaving them just 5.9mm thick while still having relatively large surfaces.