One of Samsung’s many unannounced and coming new Android tablets has been benchmarked four times over this week, and this time it’s the Samsung Galaxy Tab A7.

Samsung Galaxy Tab A7 is an upcoming Android 10 tablet at around 10.5 inches that may be launched within a month or two. We’ve seen official records of both the Wi-Fi only and 4G LTE versions with model numbers Samsung SM-T500/505/507.

The Samsung Galaxy Tab A7 that’s just been benchmarked four times this week is the 4G LTE tablet with model number Samsung SM-T505. It appears to be powered by a new Qualcomm Snapdragon 662 or 655 processor. In some ways it doesn’t matter, since it’s the benchmarks that matters, though we can see that it’s an 1.8 GHz Qualcomm Snapdragon processor with 3GB of RAM. It actually performs very similar to the Samsung Galaxy Tab S5e. 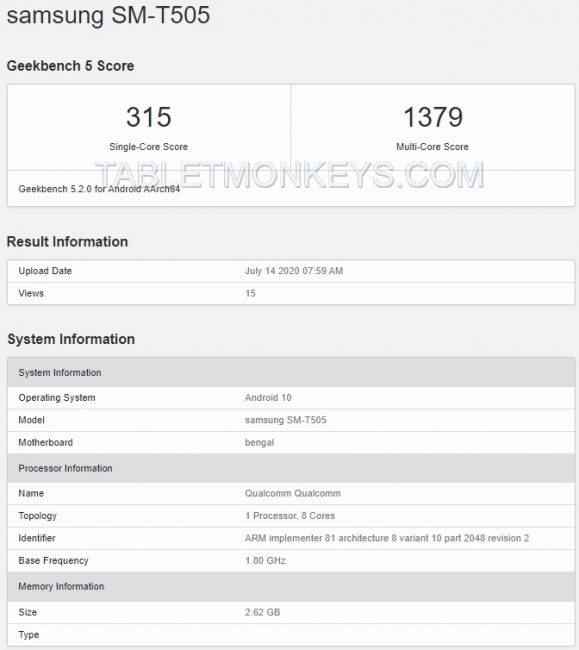 In our prior leaks, I’ve speculated that Samsung Galaxy Tab A7 may feature wireless charging too like Amazon’s newest tablet, though this has not been fully confirmed yet. There’s also a chance that this Android 10 tablet will feature an integrated digitizer and quad speakers.