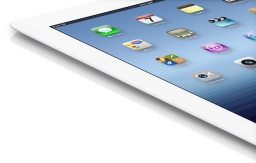 Pre-order iPad 3 and be the lucky first to buy The New iPad! “Benchmark Tablet” Apple iPad 3 – The hottest product of 2012!
UPDATE: The new The New Apple iPad (16GB, Wi-Fi, White)

has now been released for sale! End of update.)

If you are looking to buy iPad 3 aka “The new iPad”, sign up to the iPad 3 alert and be the first to be notified once it’s possible to pre-order iPad 3 and buy it from Amazon, Best Buy, Walmart, Target, Circuit City and others.
The 3rd generation Apple iPad, with its 2048×1536 high-resolution retina display, a brand new A5 Chip, and LTE Chipset on selected models – The New iPad will hit the stores March 16th, just 9 days after the unveiling of The New iPad in San Francisco.

Many buyers prefer to buy the iPad from Amazon, Best Buy, Walmart, and other Internet stores, either to make use of a gift card, or to save money by avoiding the sales tax (learn more about avoiding sales tax on tablets) they otherwise would have paid in Apple stores, or because they traded in either their previous iPad, tablet, or some other product and got money back in that store.

This alert is for the pre-order sale of the iPad 3 only. You will not receive any other emails from Tabletmonkeys, and you can unsubscribe at any time. It is just to help out our loyal supporters to be the first to buy The New iPad/iPad 3. This alert covers both USA and UK. The New iPad is now available from Amazon