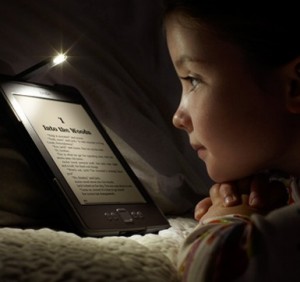 [Update, August 13.
Amazon started clearing out their old line of Kindle ereaders at the beginning of August, with Kindle DX, Kindle Touch and Kindle Touch 3G either being out of stock already or seeing a dramatically decreasing inventory.]

Update, September 6.
The device is now available for order

Information about Amazon’s upcoming new Kindle ereader has been leaked to Reuters.

We expect this Kindle ereader to be unveiled on September 6th.
The reputable source claims that the new Kindle will feature built-in front light to light up the display of the ereader.
This will be the first Kindle to feature built-in light, as you previously had to buy accessories such as Amazon Kindle Touch Lighted Cover or similar accessories to get this feature.

It is assumed that this added on feature will only lead to a slight, if any, increase in price for the new Kindle Paperwhite ereader.

Amazon have not commented on the leak, and E Ink Holdings, the supplier of the monochrome display for Kindle, has naturally refrained from commenting on their clients new orders.

E Ink has been supplying Active Matrix displays for Amazon’s monochrome ereaders for years, and E Ink’s displays can be found not only in Kindle, Kindle Touch, Kindle Keyboard, and Kindle DX, but also in the ereaders that Amazon competes against, such as Barnes & Noble’s NOOK

Amazon and Barnes & Noble’s family of e-readers and tablets head to head.

NOOK ereaders by Barnes and Noble