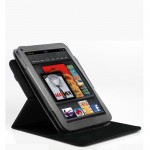 UPDATE, August 23:
Amazon sent out invitations for a press conference on September 6th that will start at 10:30 am (PDT) at the Barker Hangar in Santa Monica, California. Expect Kindle Fire HD 7 pre-orders to be taken right after the unveiling.
We will update continuously.

UPDATE, August 12:
Amazon began clearing out their Kindle inventory in the beginning of August, with Kindle Touch already being out of stock, and other Kindles seeing low inventory. – End of update.

Amazon is now rumored to have ordered 2 million of their new second generation 7-inch Kindle Fire from their tablet maker Quanta Computer Incorporated. The new 7-inch Kindle Fire HD 7 was first expected to be unveiled, made ready for pre-order, or released, in July. But with the recent release of the new Android 4.1, Amazon wanted to want to implement the new Android features before the release, which lead to Amazon delaying the unveiling of the new Kindle until September 6th.
Amazon released their first Kindle Fire on November 15, last year.

Features
New and improved features are a new metal casing said to make the tablet lose weight and make it thinner, an improved screen resolution up from 1024×600 to 1280×800 (with a changed aspect ratio from 1.71 to 1.60, giving the new Kindle Fire 2 a PPI (Pixels Per Inch) of 226 up from 169), a front-facing camera, an even better battery life, a newer customized Android OS than the Android 2.3 that Kindle Fire is currently using, as well as an improvement in terms of convenience with apps and the Amazon ecosystem overall.

Amazon have also been working hard behind the curtains lately to make their app store more international, something we will see a presentation of later this year.
UPDATE, August 30: Amazon launched their amazon.co.uk/appstore-web today in both the U.K., Germany, France, Italy and Spain.