Fujitsu have just launched a new tablet portfolio of Windows 8.1 tablets under the name Fujitsu Stylistic and another range of Windows 8.1 convertible ultrabooks called Fujitsu Lifebook.

These tablets will become available starting in November, with the last one being released in January 2014.
Here’s the basic breakdown.

Fujitsu Lifebook T904
Fujitsu Lifebook T904 is a 13.3-inch convertible ultrabook with a IGZO display with a very decent 2560×1440 resolution.
CPU options are Intel 4th gen Core i5 or i7, and there are also three OS options: Windows 8.1 64-bit, Windows 8.1 Pro 64-bit, or Windows 7 Professional 64-bit. It’s also got options of 4GB or 8GB of DDR3L RAM.
It features a changeable battery, bi-directional super high-definition rotatable display, plus dual digitizer for pen and finger input, and a backlit keyboard. The Fujitsu Stylistic T904 weighs just under than 3.3 lbs.
It will be released in January 2014. 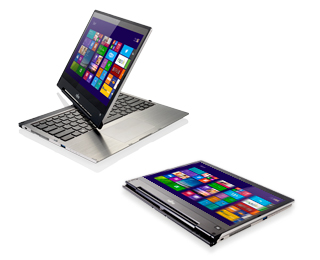 Fujitsu Lifebook T734
The Fujitsu Lifebook T734 has a 12.5-inch bi-directional rotatable display including pen and finger input, complete set of security features and a modular bay that supports a second battery or optical drive.
This device too has three OS options: Windows 8.1 64-bit, Windows 8.1 Pro 64-bit, or Windows 7 Professional 64-bit.
The processors range from Intel Core i3 at 2.4GHz, to i5, to i7 at 2.9GHz. A maximum capacity of 12GB of RAM doesn’t hurt either. Too bad it only has a 1366×768 resolution. This Lifebook sees release in November. 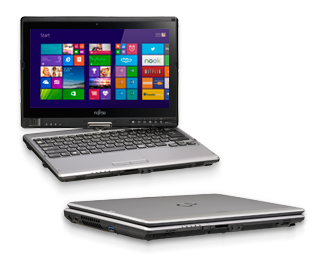 Who are these devices intended for?
Well, in Fujitsu’s own words: “Business Tablets (LIFEBOOK T904 and LIFEBOOK T734) are for mobile workers who create, share and view content, but require mobility for example doctors, nurses, insurance agents, sales professionals, teachers, students.”

As for the Stylistic range…

Fujitsu Stylistic Q704
The new Fujitsu Stylistic Q704 also have a 12.5-inch, display, but this time with a FHD 1920×1080 resolution.
This is actually a semi-ruggedized hybrid tablet PC, meaning that it’s dustproof and splashproof.
It has as much as five different OS options: Windows 8.1 Pro 64-bit, Windows 8 64-bit, Windows 7 Professional 64-bit, Windows 8.1 Pro 64-bit, Windows 8.1 64-bit, and Windows 7 Professional 64-bit.
Processors range from Intel Core i5 at 1.6GHz to Intel Core i7 at 2.1GHz. With a max capacity of 8GB LPDDR3 RAM.
Additional goodies are data entry via pen-based handwriting recognition, or onscreen keyboard with predictive text, dual performance mode for battery runtime of up to 16 hours, NFC, full USB 3.0 port and optional extension cables via microUSB, optional cradle, keyboard docking station and dockable keyboard cover. Release is set to mid-December. 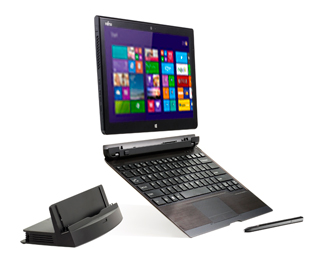 Fujitsu Stylistic Q584
And last but not least we’re looking at the other semi-rugged Fujitsu Stylistic Q584. With a 10.1″ 2560×1600 display, this device is powered by a 2.4GHz Intel Bay Trail Z3770 processor. OS options are only Windows 8.1 / Pro for this one. But it does have additional stuff like a 2MP front camera HD and a 8MP rear camera with autofocus and light.
The waterproof rating is IPX5/7/8, while it’s rated dustproof to IP5X. Other features are 4G/LTE, WLAN, Bluetooth, GPS, optional NFC, full USB 3.0 port and optional extension cables via microUSB, dockable keyboard and cradle option. The release date for the 630g Stylistic Q584 is set to mid-December.