The new Apple iPad 9.7 that was announced on March 21, begun taking orders today from $329, with online orders being released from March 31 for the ones that orders today: https://www.amazon.com/Apple-iPad-WiFi-Space-grey

This is the 7th generation 9.7-inch iPad, and the first 9.7-inch iPad to be launched with a sort of budget price relative to the high specs, though it’s not the first time that Apple have lowered their prices on iPads, since Apple lowered prices on a range of iPads back in September last year.

Since the new iPad 9.7 was unveiled 3 days ago, a lot of journalists have discovered what we mentioned at the unveiling, that it is a little thicker and heavier compared to the iPad Air 2, and also that it doesn’t have the same True Tone display, antireflective coating, and fully laminated display as the iPad Pro 9.7 does.

Supply chain sources mentioned this last month, when they leaked that Apple had switched from display manufacturer Nichia, to Seoul Semiconductor to deliver the displays for the new iPad 9.7. 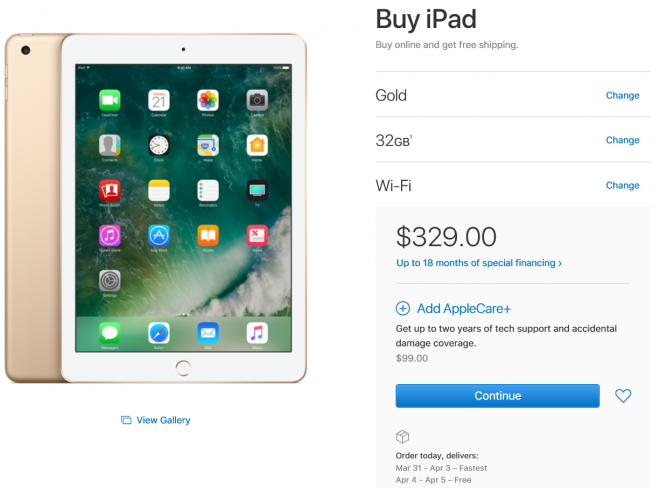 Since Apple have changed their display manufacturer for their latest tablet computer, it also means that their new display cannot be compared to those of other iPads simply by looking at the specs alone, so I’m looking forward to testing the new iPad for a while before I give my verdict.

Apple have promised that the new display on the new Apple iPad 9.7 is brighter than that of the iPad Air 2 though, while another important upgrade is the upward switch from the older A8X processor to the new more powerful and faster A9 processor.