WSJ started quoting anonymous sources yesterday who claims that Amazon will launch a new “$50 tablet” in time for the holidays, and that it will be a 6-inch tablet with a mono speaker, just like the current Fire HD 6.

The same sources also says that an 8-inch and 10-inch Amazon tablet will be launched in 2015. We know from before that these are two Amazon tablet sizes that were experimented with by Amazon back in 2012, but the 10.1-inch Amazon Kindle Fire tablet that was codenamed “Hollywood” never saw the light of day.

It’s not impossible for Amazon to have a 6-inch Fire HD 6 II manufactured and sold for $49, and I assume that Amazon have been following its own bestseller list and noticed that $49 tablets from pretty much unknown brands actually sell well on Amazon. In the top 20 tablet bestseller list, we find the NeuTab N7 Pro 7

, a 7-inch Android tablet with a quad-core processor and HD display sold for $49, a tablet that demonstrates the feasibility of Amazon’s alleged undertaking. Amazon’s own Fire HD 6 costs $99. 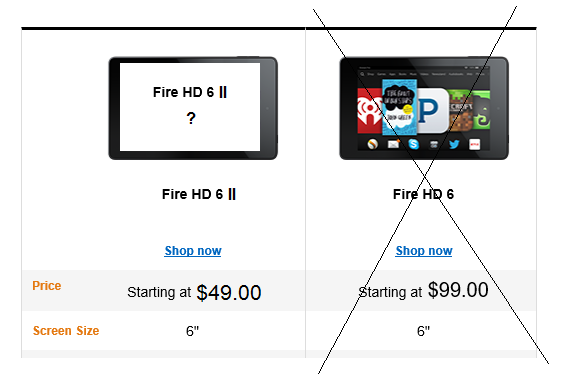 From cheap to ultra cheap this year?

It’s too early to tell if Amazon is widening their tablet portfolio or if they are focusing more on cheaper tablets and perhaps focusing less on their high-end HDX devices. The current Fire HDX 8.9 is a tablet with some of the very best specs on the market, but its sales are said to be hampered a little by Amazon’s Android based Fire OS. Barnes and Noble gave up manufacturing their own tablets altogether two years ago and have instead relied on licensing deals with regular Samsung tablets that are lightly rebranded NOOK tablets, like last week’s Samsung Galaxy Tab S2 NOOK, a tablet where Barnes and Noble have only added their own NOOK apps to the tablet and changed the home screen to make it a NOOK.

Amazon is obviously in a much better position than B&N though, and their Fire HD 6 and Fire HD 7 tablets sell well both in the US and internationally. Even countries that haven’t got a national Amazon store are importing Amazon Fire tablets into their computer stores.

Based on the last couple of years announcement dates we should not be more than 3-6 weeks away from an official unveiling from Amazon.
– Jim Miller