J.D. Power have released a study on US customer satisfaction among tablet owners, conducted in the period between March and August 2014, by questioning 2686 tablet computer owners.

Five factors were used in the study, where performance was weighted 28%, ease of operation at 22%, features also at 22%, design and style at 17%, and cost weighted at 11%.

The study found a few interesting things. One noteworthy thing was that satisfaction have increased as tablets have become cheaper. All the same, people spent on average $345 on tablets, which represents a decrease of $48 from a similar study last year.

It’s always interesting to have figures like these, but at the same time the study is deeply flawed if you read too much into it too quickly. 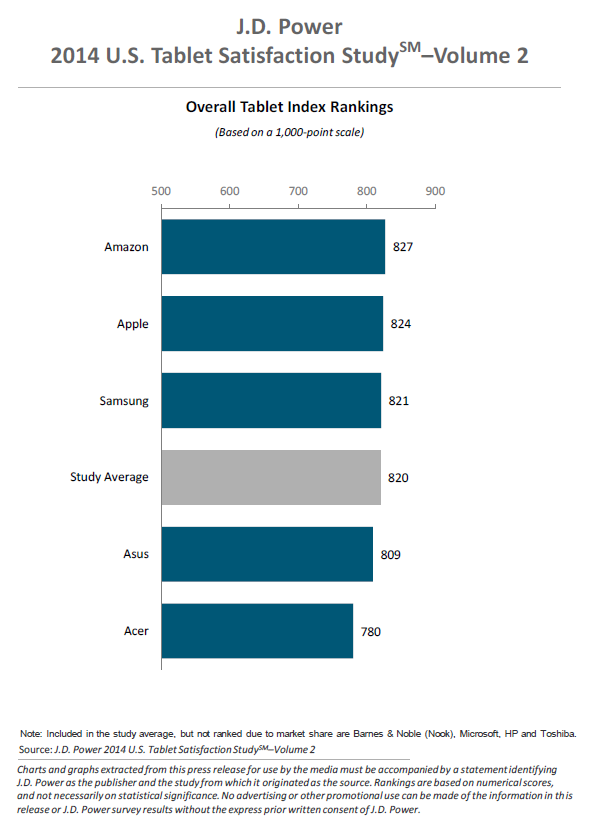 First of all the study excludes some of the largest tablet manufacturers in the world, like Microsoft, Lenovo, HP, and Toshiba, as well as Dell, Sony, and LG.

Secondly, it has a lot to do with expectations. And while Asus tablets are generally great in each category Asus have entered, Asus customers may also be the most picky of them all.

The good news of this survey seems to be that tablet brands will have to keep prices low on the majority of their tablets and deliver a good blend of performance and features if they want to rank highly, and that should benefit all of us.