Huawei is unveiling a new Android tablet called Huawei MediaPad M2 in Paris, France these days, where this 8-inch tablet will be sold from 279 Euros.

As a successor tablet, it is built on the old tablet, but it also seems to have improved a lot so that it is almost a totally new tablet.

According to Les Numeriques the 8-inch screen is a Full HD 1920 x 1200 resolution IPS display, and while I haven’t seen it myself yet, I imagine it is much better than the first model, which had a poor display. As for performance, it’s powered by a 2.0 GHz octa-core Hisilicon Kirin 930 (Cortex A53) processor, has 2GB of RAM, and 16GB/32GB storage. 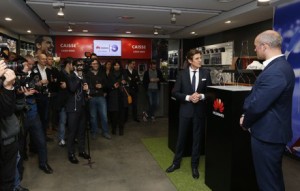 It’s slimmer than the predecessor too, at 7.8mm in thickness, with a weight of 310 grams.

The 279 Euros is the price for the Wi-Fi model, while a 4G LTE model will cost 349 Euros. For the time being it doesn’t look like this tablet will be launched in North America though.