Now that the dual-OS Asus Transformer Book Trio has been released, FCC filings suggests that more dual-OS tablets from Asus is being manufactured for 2014.

Potentially, these tablets could even be 7-inch tablets, as opposed to the 11.6-inch Asus Transformer Book Trio

that was released in the US last week. That dual-OS Windows + Android tablet and laptop has on the Android tablet device specs like an Intel Atom CPU, 2GB of DDR2 RAM, 1920 x 1080 FHD resolution, and a 19Wh battery. While the Windows 8 laptop part of this device has an Intel Core CPU, 4GB of DDR3 RAM, a hard drive in either 500GB, 750GB, or 1TB configurations, and a 33Wh battery.

It’s a neat computer product but heavy if you think of it merely as a tablet at 1,678 gram. Even though that is of course the total weight of it. The price is even worse, at $1,399. So unfortunately not very many people will enjoy this hybrid tablet. But do people either need or want dual-OS computer devices? So far, sales of dual-OS computers have been sluggish, even if high prices has had something to do with it.

The next spectacular device to expect from Asus could be the Asus Padfone mini, which might be due on Wednesday already. That’s an Android tablet with a phone in its back. 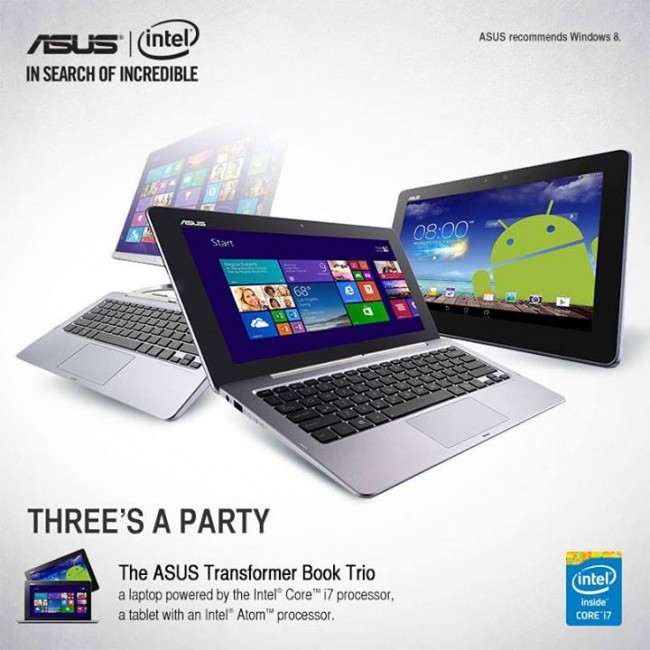