Other top brands may see price cuts with as much as 20% – 25%, while low end brands and budget tablets often get cut even more than that for Cyber Monday and Cyber Monday Deals Week.

Kindle Fire HDX 7
What a deal! This is the hot new 7-inch Full-HD 1920 x 1200 resolution Kindle Fire with the 2.2GHz Quad-core Qualcomm Snapdragon 800 processor and 2GB of RAM. Those specs makes this the most powerful 7-inch tablet in the world, with a processor that only a few expensive tablets have, like the newly released Nokia Lumia 2520 tablet which costs $499. With the Android + Fire 3.1 OS there’s a wide variety of ecosystems and media to choose from too, from Amazon to Google Play.
Regular price: $229. Kindle Fire HDX 7 Cyber Monday sale:
– Cyber Monday Special,

Kindle Fire HD 7 (16GB)
The newly upgraded Kindle Fire HD 7 now features a 1.5GHz dual-core processor and 1280 x 800 resolution. It has the Android + Fire 3.1 OS that gives it a lot of variety and wide access to digital media. And Amazon didn’t skimp on this year’s Cyber Monday sale either, because the sale is for the 16GB version even, not the smaller 8GB variant.
Regular price: $169. Kindle Fire HD 7 Cyber Monday deal:
– Cyber Monday Special,

or $429 with Touch Cover keyboard. (Temporarily sold out). Still available in Canada, even the $199 32GB model.

Samsung Galaxy Tab 3 7.0
The bestselling 7-inch tablet Samsung Galaxy Tab 3 was released in June and runs Android 4.2. It has some of the absolute longest battery life at over 12 hours on average. Powered by a 1.2GHz dual-core processor, has 1GB of RAM, and the model on sale has 8GB memory, with white and gold-brown color options. Even has Universal Remote Control owing to the IR-blaster. 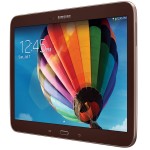 Samsung Galaxy Tab 3 10.1
This is a 10.1-inch Android tablet, which is a elegant tablet in itself, but still a little overpriced in a specs-to-price ratio compared to the Asus MeMO Pad FHD 10, also on sale. Still has a great deal of features and apps though, and like the smaller 7.0 model this tablet also feature IR universal remote control.

Samsung Ativ Tab 5
This is a 11.6-inch Windows tablet, with 64GB storage, a dual-core 1.8GHz Intel Atom Z2760 processor, and 2GB of RAM. Just like the Galaxy Note tablet, the Ativ Tab 5/Ativ Smart PC 500 also features an integrated S Pen digitizer. The deal on this tablet seems to include the keyboard too.
Regular price: $499 (for white 64GB model without keyboard). Cyber Monday Tablet Deals:
– Amazon, new price to be announced at exactly 12:40 PM

(Temporarily out of stock. Will update on progress.)
– Amazon

Asus Transformer Pad TF300
A 10.1-inch Android tablet powered by a quad-core 1.2GHz Tegra 3 processor. Has 2GB of RAM and 16GB of storage. Also included in the price is Polaris Office. A lot of people buy an attachable keyboard dock made for the Transformer, which gives it a very long battery life, and makes many use it as a real productivity tablet.
Regular price: $299. Cyber Monday deal on Asus Transformer Pad TF300:
– Amazon,

Razer Edge Pro
Razer Edge Pro was made to be the worlds most powerful PC gaming tablet. But given the Windows 8.1 and hardware specs it got, it became one of the most powerful tablets around of all tablets. Try finding another tablet with 8GB of RAM and an Intel Core i7 processor. Has lots of accessories too.
Regular price: $1,299. Razer Edge Pro Cyber Monday tablet deal:
– Microsoft Store, $999.

Update: Dell Venue 8 Pro, the 8-inch Windows 8.1 tablet that was released just 5 weeks ago is back in stock and on sale. The regular price for the 32GB model is $299, but at the time of the writing, it is on sale