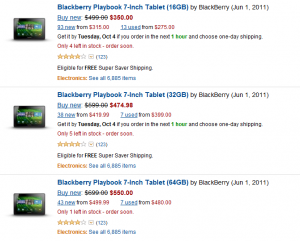 Updated: In February 2012, those looking to buy Blackberry Playbook

In the fast paced world of tablet computers, nothing stays the same for very long. Now Blackberry’s very solid tablet Playbook is a contender in the low entry price segment after Amazon released its Kindle Fire tablet. Blackberry also cites sales that were lower than expected as a reason for lowering their price guidance. Good news for the consumer either way.