By Tom Bowen – RIM released a 1.5GHz, 4G LTE edition of the Blackberry Playbook tablet on August 9, which has only been available for sale in Canada since then. Research In Motion have also developed a new OS named BlackBerry 10, that will operate RIM’s new smartphones, and perhaps also their soon-to-be tablets.

RIM recently released a 2.1 update to the BlackBerry PlayBook on October 3, that gave it some new features, including Android apps compatability even. 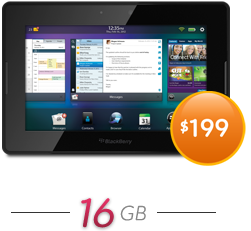 The Blackberry Playbook was released on April 19 2011 for $499. The price was then cut drastically this time last year, before it eventually settled at $199 for the 16GB model. The last two weeks it has become even cheaper, with a current Amazon price

The 7-inch Playbook always had very good specs, apart from the 1024×600 display being below todays Q4 2012 standards. Apart from that, the main drawback for most people was an OS they were not accustomed to.

However, Blackberry Playbook customer satisfaction has consistently remained very high amonong those who did know it and bought it.