Samsung kicked off a week of tablet deals by cutting prices on most of their Samsung Galaxy tablets today. Starting Sunday, November 18, Samsung is cutting prices by up to $100 in a deal that’s valid to December 1. 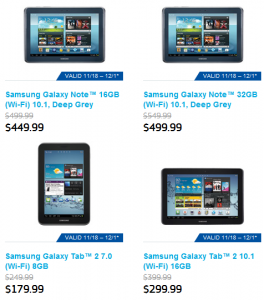 Amazon then added to Black Friday Deals Week (lasting from Sunday 19 to Saturday 24), by offering the brilliant 10.1-Inch Asus Transformer TF300 with 32GB

All three tablet deals will end on Saturday, November 24.

Lenovo’s ultrabook IdeaPad Yoga 11 will also se a discount, down from the normal $799 pre-order price we have seen the last month, to $679.20