Here are the best Black Friday Tablet Deals 2015 that you don’t want to miss this November, since there are Black Friday sales on both brand new tablets as well as large discounts on some of the tablets launched earlier in 2015.

And there are Black Friday Tablet Deals on several brands, on both Android and Windows tablets, and many of these deals begins as Thanksgiving Deals since they start a day or two ahead of the actual Friday. New tablet deals are added to this page throughout Black Friday whenever good tablet deals becomes available. (Last updated: 4:25 PM Eastern Time (ET), Friday, November 27, 2015.)

Fire 7
Yup, they did it! As if $49 wasn’t low enough for a tablet, Amazon cut the price even further in their cheapest Black Friday tablet deal ever, giving this 7-inch tablet a price of just $34.99.
It comes with Amazon’s Android based Fire OS 5 operating system with access to Amazon Underground and the long list of included features and media content, a 1.3 GHz quad-core MediaTek processor, 1GB of RAM, 8GB of storage with microSD card expansion up to 128GB + free unlimited cloud storage at Amazon for all the content. It also has a 0.3MP front camera for video chats on Skype and a 2MP rear camera with HD video recording. 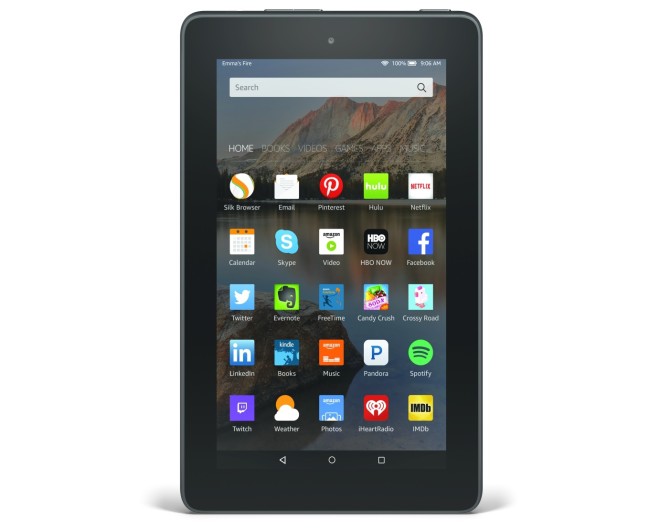 Fire HD 6
The best selling 6-inch HD tablet with 1280 x 800 resolution sees a Black Friday sale in 2015 down to just $69 for this highly rated Android + Fire OS tablet with Dolby Audio, a quad-core 1.5 GHz processor, 1GB RAM, immediate access to the Amazon ecosystem with media and live 24/7 Mayday help with any setting you need help with. Has a 0.3MP front camera and 2MP rear camera as well and lots of color options, such as black, white, yellow, pink, and blue.

Microsoft Surface 3
The cheapest Surface tablet with Windows 10 is celebrated with a Black Friday sale, where this 10.8-inch Full HD tablet is on sale as a bundle with the Type Cover keyboard, which saves $150. The tablet deal applies to both the Wi-Fi model and the 4G LTE model of the Surface 3 with either 64GB or 128GB storage, while color options for the keyboard are red, black, blue, and bright red. Other highlights include Intel Atom x7-Z8700 processor, USB 3.0, full Surface Pen digitizer support, the fastest ac Wi-Fi support, 3.5MP and 8MP cameras, and Dolby stereo speakers. This is a popular student tablet too. 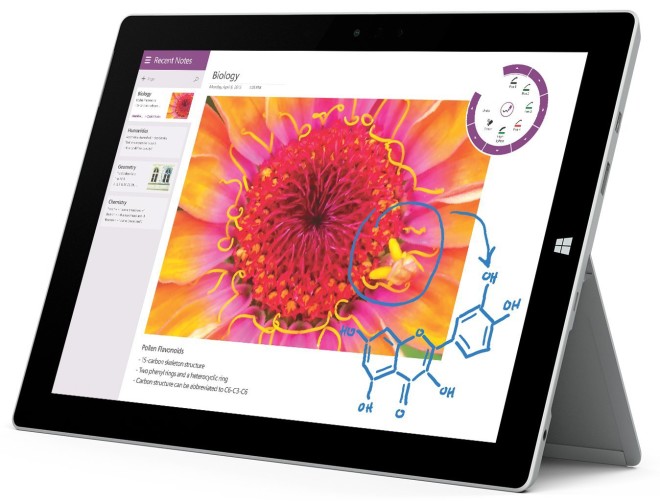 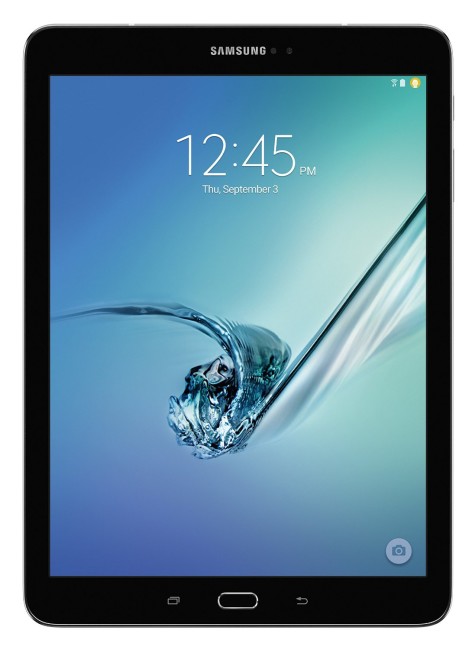 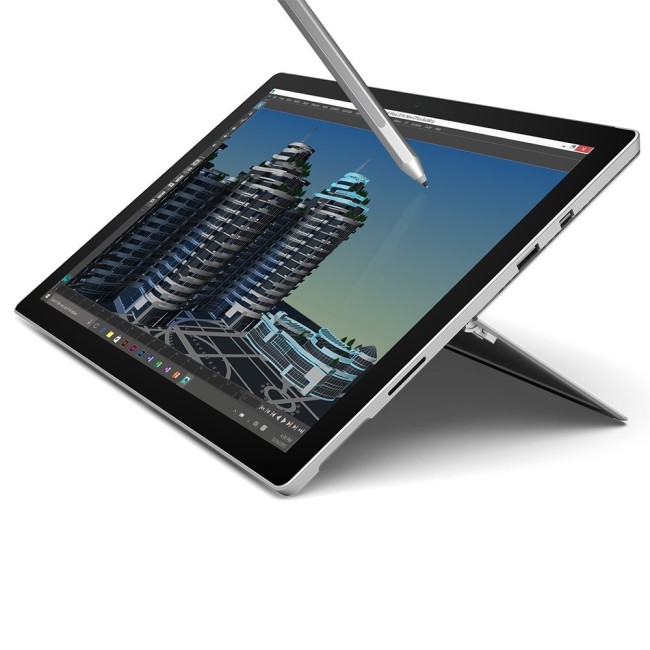 , $699. This deal is live now ahead of Thanksgiving Thursday. 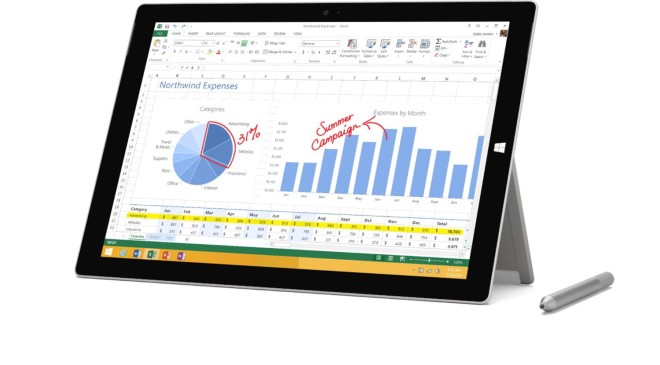 Samsung Galaxy Tab A
There are Black Friday sales on both the Android tablets Samsung Galaxy Tab A 9.7 and the Samsung Galaxy Tab A 8.0, which gives these two popular tablets the lowest price yet. Included are 1.2 GHz quad-core processor, 1.5GB RAM, 16GB storage, split window multitasking, a HD 2MP front camera free, a 5MP rear camera, Microsoft Office for Android, free cloud storage, kids mode, and a host of other features. 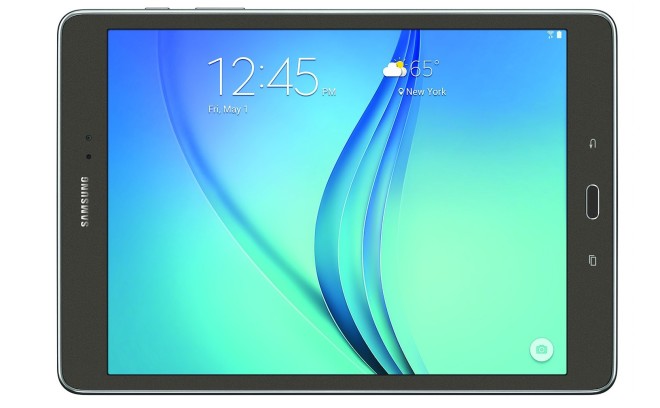 Samsung Galaxy Tab 4 7.0
One of the bestselling tablets of all time, the Android tablet Samsung Galaxy Tab 4 7.0 has a Samsung Black Friday deal on this 7-inch tablet with HD 1280 x 800 resolution, a quad-core 1.2 GHz processor, 1.5GB RAM, 8GB of storage with 32GB microSD card expansion and 50GB cloud storage. It has a lot of features this solid and loved Samsung tablet, ranging from IR-blaster remote control, to multitasking, and it has a 1.3MP front camera and a 3MP rear camera too. 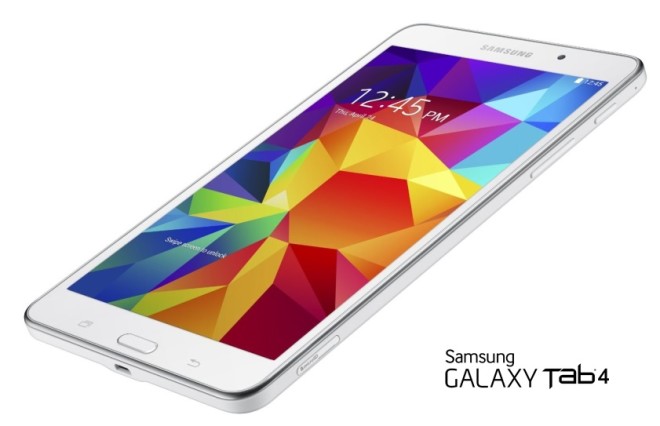 Samsung Galaxy Tab 4 NOOK 7
The exact same tablet as the Samsung Galaxy Tab 4 7.0 above, only that the NOOK comes with some extra free features as well as some free credit at Barnes & Noble that can be used on books, magazines, newspapers, apps, and other media. But it’s otherwise a normal Android tablet with full access to Google Play. 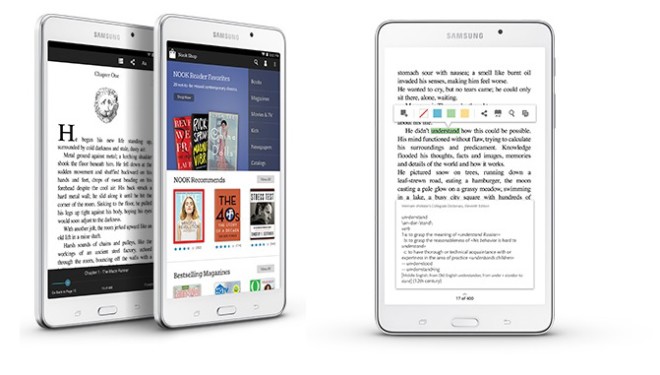 Made for Google by Asus, the Nexus 7 is a tablet for everyone, and it’s a tablet that never really disappoints, which is reflected in the very high customer rating. 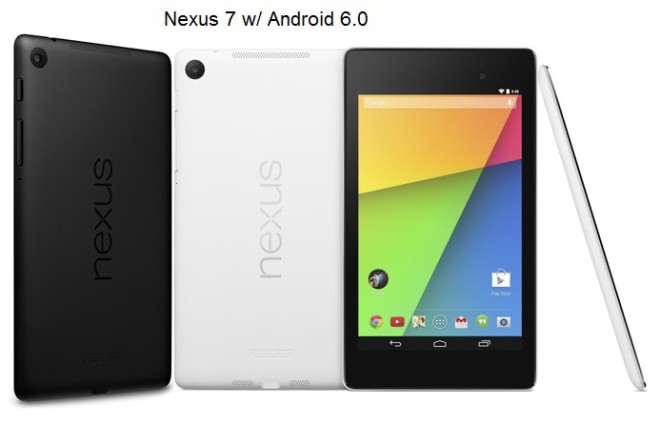 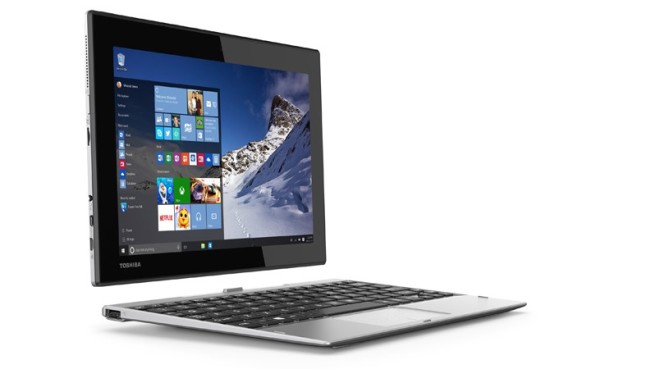 Acer Aspire Switch 10 E
Acer Aspire Switch 10 E is a 10.1-inch Windows 10 2-in-1 tablet with choice of 32GB or 64GB storage, 2GB DDR3 RAM, a 10.1-inch screen with 1280 x 800 resolution and 10-point touch, a quad-core Intel Z3735F processor, 12 hour battery life, dual-band Wi-Fi, two cameras, and stereo speakers. The detachable keyboard has and additional USB port too in addition to that on the tablet. This Windows 10 2-in1 can also be bent backwards and set up in tent mode. The screen will rotate accordingly, so that way the keyboard can be used as a stand for the tablet. 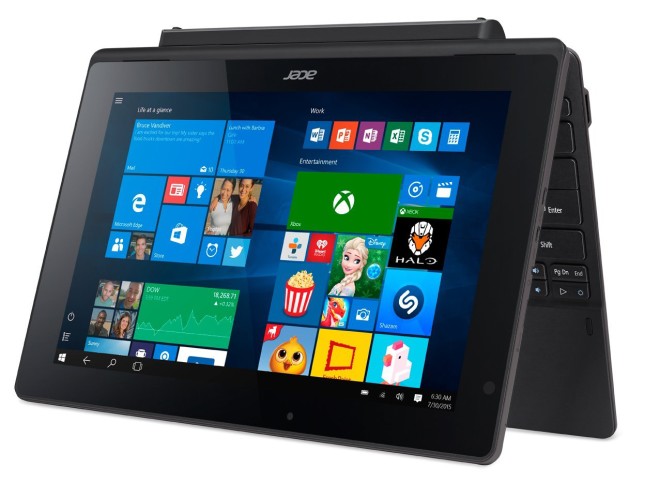 Samsung Galaxy View
The brand new octa-core (8-core) processor powered and 18.4-inch large Android 5.1 tablet is one of the Black Friday tablet deals for 2015, saving customers $100 on this Full HD tablet with 2 x 4 watt speakers and 32GB storage. Launched just 3 weeks ago, and the tablet got a new app called Remote View last week that can turn any Android smartphone into a remote control for the the Samsung Galaxy View, including the ability to navigate with a mouse cursor on the display of the tablet via the Bluetooth connected smartphone remote. 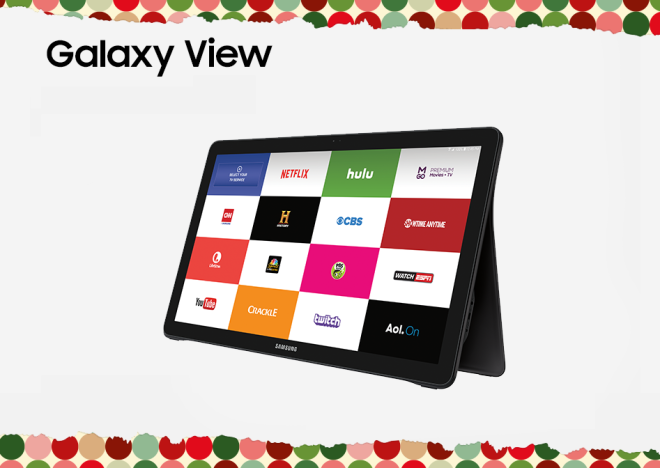 Acer Iconia One 8
Another Acer Black Friday deal is for their 8-inch Android tablet Acer Iconia One 8, with a record low price. It was launched in the US in January 2015 for $129, and has a quad-core Intel Atom Z3735G processor, 1GB DDR3L RAM, 16GB storage + microSD card support to 64GB, a 1280 x 800 resolution IPS display with 10 finger touch support, anti-fingerprint coating, and Zero Air Gap lamination, a 0.3MP front camera, a 5MP rear camera, and 802.11 b/g/n Wi-Fi band support. The drawback is that if you want to run Android 5.1 or Android 6.0 on this tablet, you will have to install it yourself, since the last official OTA update from Acer was Android 4.4. So this is probably a reason behind the great tablet sale for Black Friday week. 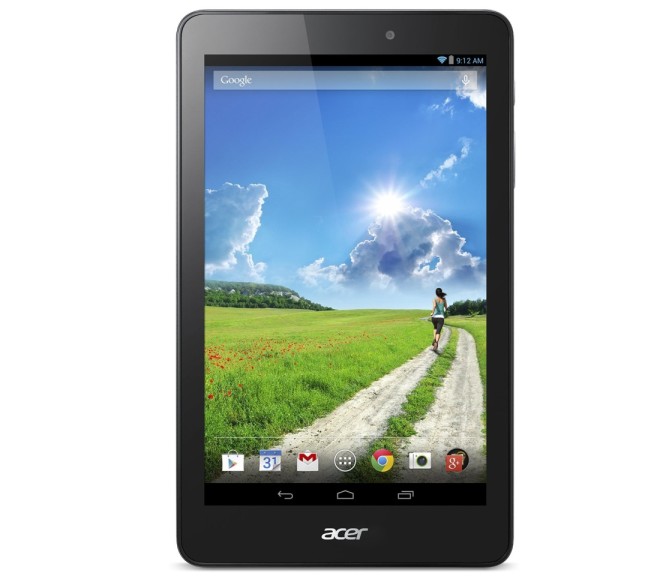 Amazon Fire Kids Edition
The new kids tablet / children’s tablet that Amazon launched a couple of weeks ago has been given a timely Black Friday deal ahead of Christmas 2015, which I’m pretty sure will make kids cheer. TThe Amazon Fire Kids Edition is a 7-inch HD tablet with front and rear cameras, quad-core processor from MediaTek, Dolby speakers, 1GB of RAM, a rugged but soft childrens case that protects the tablet from drops, and protects children from drops too, as well as providing better grip for a child’s small and developing hands. It comes with the Android + Fire OS 5 operating system, with access to the very rich Amazon media content ecosystem with educational apps, games, music, TV-shows, movies, books, and magazines, and Amazon will replace it if it gets broken without asking any question. 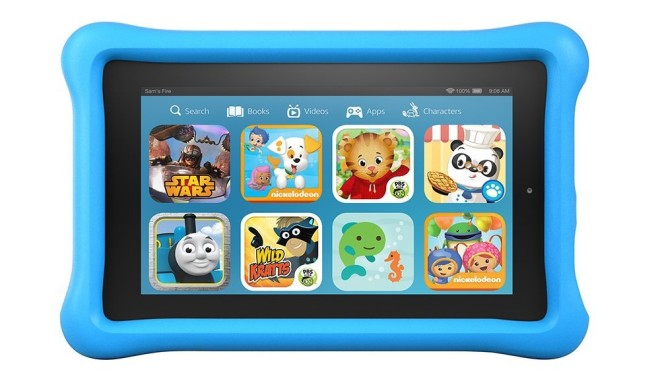 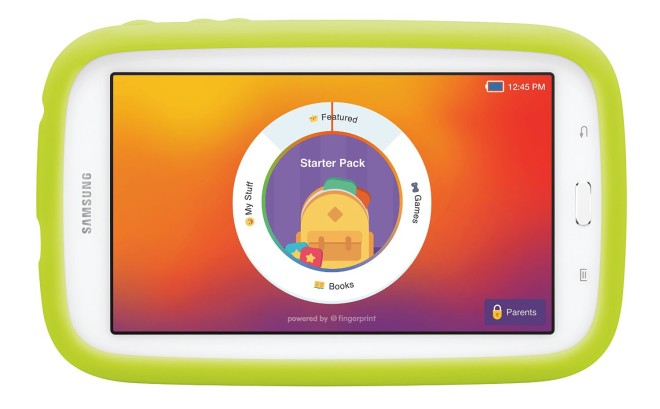 Samsung Galaxy Tab 3 Lite
Another Samsung Black Friday deal on one of their popular 7-inch tablets with Android. It doesn’t cost more than $79 on account of the 1.2 GHz dual-core processor, 1GB of RAM, 1026 x 600 resolution, and 8GB of storage with 32GB microSD card support. Also has 8 hour battery life, a 2MP rear camera, GPS, accelerometer, and color options of black or white. 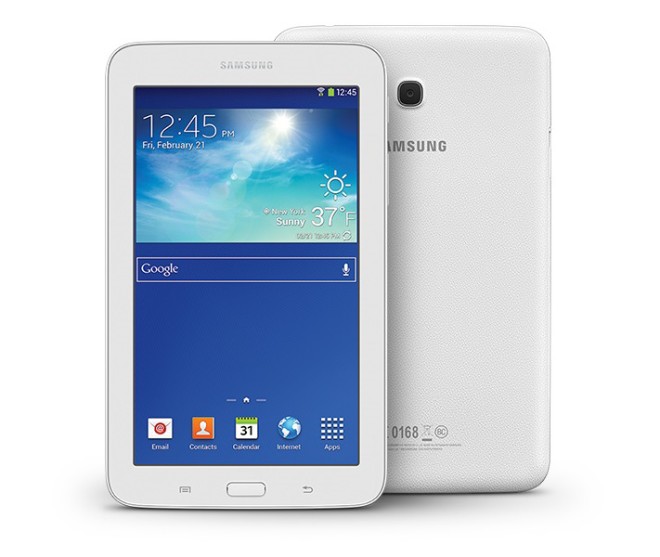 Onda V919 Air Tablet
There are even tablet deals on dual-OS tablet this Black Friday, with the dual-OS Windows 10 + Android 5.1 tablet Onda V919 Air being on sale these last November days. This is a iPad similar gold colored 9.7-inch tablet with 2048 x 1536 resolution, 2GB of RAM, 32GB of storage with 128GB microSD card support, a quad-core 64-bit Intel Atom Z3735F processor, 7200 mAH battery, and it is being sold with free shipping. 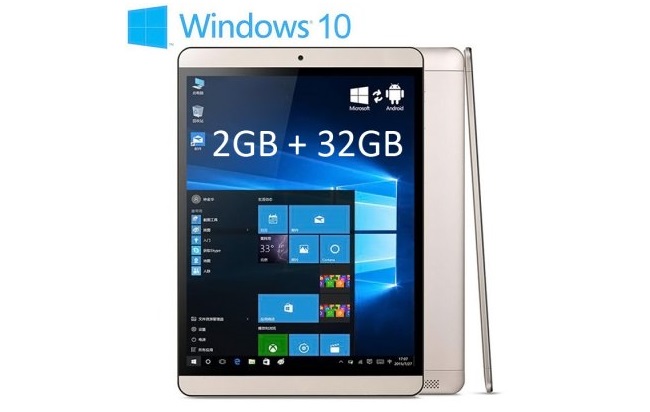