After Apple unveiled the new iPad Pro 11 and iPad Pro 12.9 III two days ago, ahead of their launch next week on November 7, the tech community have been waiting for the new iPad Pro benchmark scores too. And now that they have surfaced, the scores indicates well what kind of performance we can expect.

Apple itself stated that the new 64-bit octa-core Apple A12X Bionic chipset was 35-95% faster than the predecessor, which is the A10X processor used in for instance the iPad Pro 10.5, an iPad that Apple have decided to keep in its iPad Pro portfolio for now. 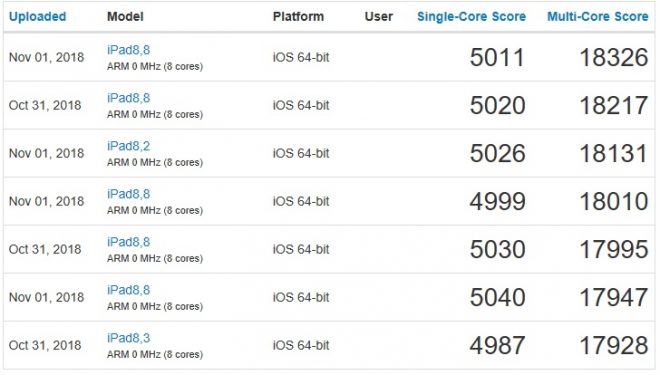 These benchmark scores are about the same as those of the Surface Pro 6, which is also priced very similarly.

The 1TB iPad Pro models also features 6GB of RAM, whereas the three lower storage option models features 4GB of RAM. So the two new iPad Pros with their Neural Engine and M12 coprocessor are now about twice as powerful as before in terms of graphics handling.

What all of this can be used for and how significant it is really depends on someone’s use, as these iPad Pros are seriously powerful, but some users will say that developers have been to slow to take advantage of the latest iPads power and capacities. Hopefully this will improve, and the introduction of a industry standard USB C port on the iPads this week should help that process along.