A fourth Asus tablet with the code name/model name K0 have appeared with some specifications that leaves a little something for the imagination.

Listed simply as Asus K01B at GFXbench.com, it begins easy enough with Android 4.4 on board. But then it’s listed with not only a 10-inch display but also a 14.2-inch display, both of which sports Full HD 1920 x 1200 resolution.

So that leaves something for speculation, even if it’s not a giant 14-inch PadFone with a 10-inch phone in the back.

The other specs seems more straight forward, with a 1.4GHz quad-core Qualcomm Snapdragon S4 Pro and Adreno 320 GPU, 2GB RAM, a 4.8MP rear camera, with a 1.2MP camera on the front side of the tablet.

At least from the display listing, it could be interesting to see what kind of device this is, even if the rest of the specs are not that interesting by today’s standards. This tablet was discovered on the same day as the 9.4-inch Asus K01E was first noticed. 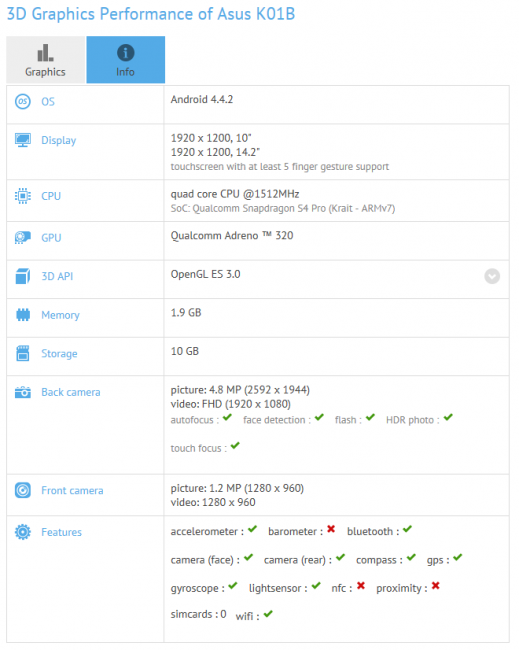