A new Asus tablet have been spotted in a benchmark test, indicating that a new 10.1-inch 2560×1600 Android tablet is on the way.

Tested under the name of Asus Eee Pad Taurus, this new Asus tablet sported a 1.9GHz Tegra 4 processor, Android 4.2.2, and a 10.1-inch display with a 2560×1600 resolution. This would suggest 2GB of DDR3 RAM as well. Expect an official unveiling of this tablet at IFA next week, and a release within December 2013. 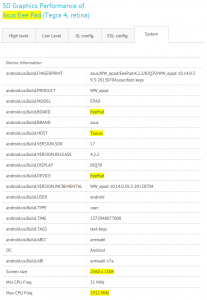 There’s been a lot of Asus Eee Pad tablets over the years. Since 2011 we’ve seen Eee Pad MeMO, Eee Pad MyWave, Eee Pad Transformer Prime TF201, Eee Pad Transformer TF101, and the Eee Pad Slider SL101. With the sheer amount of tablets that Asus is pumping out and the names they put on them, it’s easy to get lost and confused when looking at Asus tablets.

At the time of the writing there are no fewer than 10 new tablets from Asus that are waiting for their release, so let’s hope Asus will stick with a simple and memorable name like Taurus this time.

Otherwise we might be looking at the new ASUS Eee Pad Confusor TF801-A3.