It is a “kids tablet” or “childrens tablet” that was new to the current range of Amazon Kindle Fire tablet models that was announced in September.

It can be had as a 6-inch or 7-inch tablet, both of which are based on the regular Fire HD 6 and Fire HD 7, but which have added children’s features on the software side, and on the physical side it has rugged silicon rubber to protect the tablet, though Amazon say they will “Replace it if broken – no questions asked!”

The tablet is okay, and it’s among the better kids tablets, but I don’t think it’s the best. The best children’s tablet is rather the Samsung Galaxy Tab 3 Kids Edition, a tablet that has always felt much more thought through than the rest of the children’s tablets, in every respect, whether it’s in terms of apps and setup or the physical design of it. 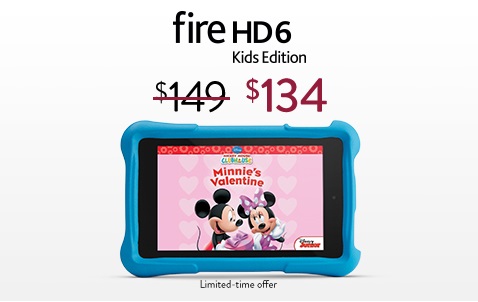 In terms of specs the Fire HD Kids Edition has a high quality display with 1280 x 800 resolution, a quad-core processor, 1GB of RAM, dual cameras, Dolby sound, and one year of free Amazon Freetime Unlimited where kids have unlimited access to educational apps, games, shows, movies, and a little over 5000 books.