edition will start shipping next week, on November 20. Backorders for these tablets are pretty formidable at the moment, with the second batch of these two 8.9-inch Kindle Fire HD’s, shipping on December 3. 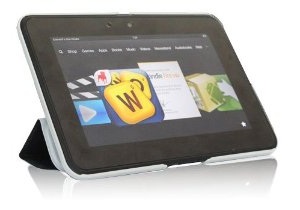 The 9-inch NOOK HD+ features an even better 1920×1280 high-resolution display with 256 ppi, and a slightly lower price, at $269. The NOOK HD+ also comes without ads (the kind of ads Amazon calls “Special Offers” on Kindle Fire tablets, that you can opt out of for a small fee).

Both the new NOOK HD+ and the Kindle Fire HD 8.9 are great tablets, so for most people it becomes a question of what ecosystem and content they want to run on their tablet.

And despite not having been released until today, the Kindle Fire HD 8.9 has been on Amazon’s top 10 tablet bestseller list every day since the unveiling two months ago.