It’s the end of July, which is an appropriate time for some possible leaks and rumors ahead of a possible new Amazon Kindle Fire 8.9 tablet.

And just like with last year’s launch, the possible hardware is cutting edge. AnTuTu have listed the new 2014 Amazon Kindle Fire HDX 8.9 tablet with a quad-core Qualcomm Snapdragon 805 processor at 2.45GHz, with Adreno 420 GPU and 2GB RAM.

The 8.9-inch display is a Samsung-familiar 2560 x 1600 resolution, same as on the existing 8.9 HDX model. The front camera is listed at 1MP (actually 1.2MP), though the rear camera would stay the same at 8MP. Now considering the flurry of cameras on the newly introduced Amazon Fire Phone, it’s hard to tell if this is actually a believable rumor, even if the processor choice would make sense. 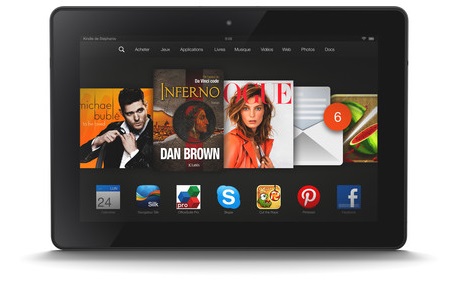 Last but not least it is also listed with Android 4.4.4, with no sight of the Fire OS on top of that.
Of course, one of the most interesting and particular things about Kindle Fire tablets are the special Amazon features. So even if the specs turn out to be true, the most interesting aspects of this tablet might still be hidden until the day of the unveiling.

An official presentation is expected in September. And we’ll update along the way as new rumors and leaks come out.