More February tablet deals are coming in every day now, and the latest tablet to go on sale ahead of Valentine’s Day is the popular 7-inch Amazon Fire tablet with a low price of just $39:
http://www.amazon.com/gp/product/B00TSUGXKE/

But it’s not the only Amazon tablet on sale this week. The Fire HD 10 and the Fire Kids Edition is also on sale for $179 and $79 respectively.

The Amazon Fire is a 7-inch tablet with Amazon’s Android skinned Fire OS on top, with access to Amazon’s entire ecosystem of apps, books, magazines, movies, TV-series, music, and other media content.

On the feature side this tablet has a lot going for it from the live 24/7 Mayday function with help any time of the day, to the Amazon Underground, to free unlimited cloud storage of pictures taken with Amazon devices.

Released 4 months ago, the hardware specifications of the tablet are entry level, but still enough for for watching movies, browsing the web, and playing the same kind of games people run on smartphones. Tablets like these with the same level of specs from Lenovo and Asus have been launched for $99 the last year, so the value for money is good by that comparison. 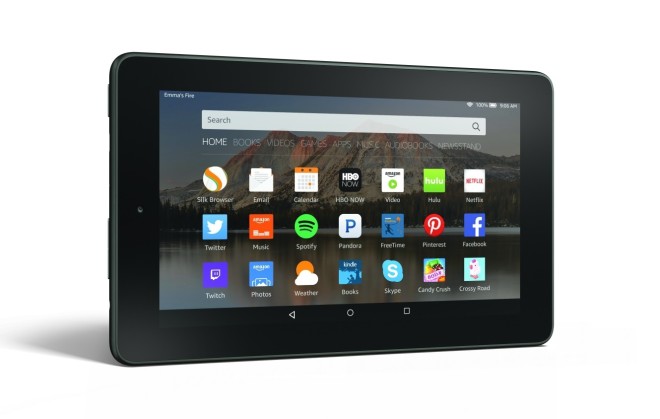 The microSD card that Amazon used during the development of this tablet, was the new SanDisk Ultra

memory card developed particularly for the new Amazon tablet series. This is why those cards have “Made For Amazon” written on them. So if you want a microSD card that’s guaranteed to be 100% compatible with the Amazon Fire tablets, that’s the memory card to go for.

In January Amazon introduced the blue light reduction feature on all Fire tablets too, a feature that hasn’t even come to the iPad yet, though it will. This is a feature that reduces emitted blue light from the tablet in the evening so that a users circadian rhythm isn’t interrupted.

The Fire Kids Edition that we also mentioned being on sale this week, is actually the same tablet as the Amazon Fire, just that it comes with the Kid-Proof case, a particular setup, and a free replacement warranty where Amazon will give you a new tablet if your kid (or someone else) breaks it. But one way to save money is to just buy the $39 Fire tablet on sale, and the Kid-Proof Case

separately for $24. The total price for the kids tablet version would then be $64.98.

There are a few other February tablet deals going on right now too, but in a very different price range naturally. Even on sale, the Surface Pro 4 deal that just started, still begins at almost 20 times more than the $39 Fire tablet.