Amazon unveiled their new Fire HD 8 Reader’s Edition today, which marks the entry of the Blue Shade feature on the tablet, a feature that will basically reduce blue light emitted from the tablet display and thus significantly reduce the potential impact that emitted light has upon a person’s body clock, such as regulation of melatonin.

Together with the Fire HD 8 Reader’s Edition tablet comes over 1 million books and unlimited audiobooks, as well as a limited edition origami style leather cover: http://www.amazon.com/b/node=13295758011

The Blue Light is not a new hardware technology put into the tablet, instead it is a new software feature introduced through the operating system Fire OS5 Bellini now.

So the actual tablet is the same Fire HD 8 that Amazon launched on September 30. Which is not a bad thing in itself, because the Fire HD 8 is a decent tablet, if you don’t mind the Fire OS 5 operating system. 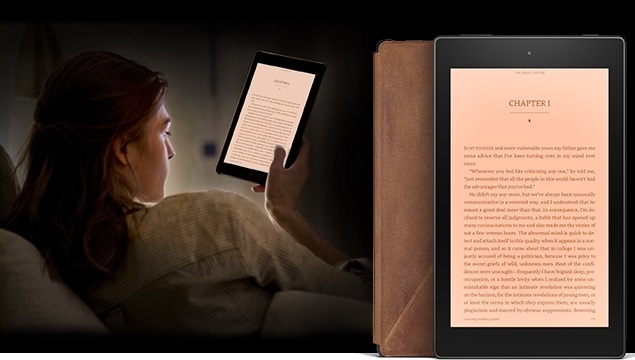 So apart from the bundle on this Fire HD 8 deal, the only new thing is really the Blue Light feature. Blue light emitted from displays have been a real concern the last couple of years, since it can affect a persons sleep pattern after enough exposure.

The actual Blue Shade feature works automatically, but can be controlled manually too. And in addition to removing blue light emitted out, it will add warmer color filters on the display. So this is a feature with reading in mind, and probably not something people will use as much when watching movies or TV-series at night.

Fire HD 8 Reader’s Edition will be released on December 9 and is now taking orders for $249. Without the bundle, the 8-inch Fire HD 8 tablet itself is on sale for a few days now, at $129 just now.