The Amazon Fire HD 10 is released today on September 30, along with the other new Amazon Fire tablet models for 2015–2016. This is Amazon’s first 10.1-inch tablet, and even if the price isn’t very high among tablets, we still need to find out if it’s worth the money: The launch price for the 16GB model is $229:
http://www.amazon.com/Fire-HD-10-1-Display-Wi-Fi/dp/B00VKIY9RG/

Like all of Amazon’s own tablets, it has the Fire OS, which in the current release is built upon Android 5.1 and released as Fire OS 5 “Bellini.” With the Fire OS 5 comes a lot of content and services that fits both into the Amazon ecosystem of media like books, magazines, movies, TV-shows, music, apps, games, and an evergrowing list of new services all the time.

Some of the services that are included with the Fire HD 10 and other Fire OS 5 tablets range from unlimited cloud storage for pictures taken with a Fire tablet, to free live 24/7 Mayday help from Amazon with screen sharing if you need help with using the tablet or setting it up somehow. Other services included with this tablet include the capacity to let Amazon automatically download new and related movies and TV-series for you so you’ll always have something fresh to watch, it has updated features for sharing Amazon content and services with household members, it gives access to the long list of free apps and content in the new Amazon Underground appstore, as well as providing owners with all the many Fire OS features services from before. 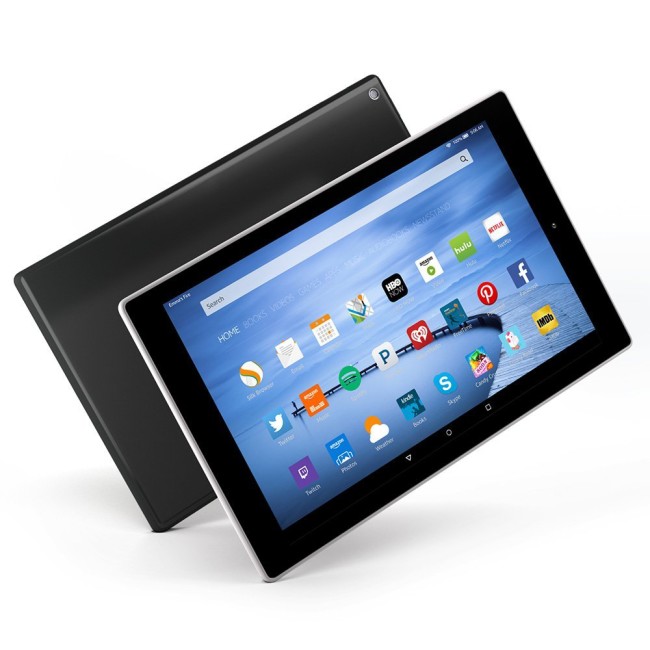 So that’s on the features and services side of the Fire HD 10. One the hardware side of it, we are are looking at a 10.1-inch tablet with 1280 x 800 HD resolution that has a fully laminated wide-angle 178-degree IPS display with anti-reflective polarizing filter. So the display itself is good, with good contrast and natural color balance, which has always been the case on all of Amazon’s tablets. Independent screen tester DisplayMate have rated Amazon’s tablet display as the best in many of their categories over the years.

The processor is a quad-core 1.5 GHz MediaTek MT8125 processor, since Amazon, just like Lenovo and Acer have chosen MediaTek processors for a lot of their tablets the last two years. The graphics processor is a Technologies PowerVR Rogue G6200 GPU, while the Fire HD 10 has 1GB of DDR3 RAM. Storage options are either 16GB or 32GB, but Amazon made the wise hcoice of including microSD card slot on their Fire tablets this year, with support for microSD cards all the way up to 128GB. Amazon have worked with SanDisk in the development of the microSD card slot, which is why there are microSD cards from SanDisk

that now says “Made for Amazon.” So at least we are assured now that the newest SanDisk microSD cards are fully compatible with all the Fire tablets.

Fire HD 10 has a 0.9MP front camera, and a 5MP rear camera with Full HD video recording support, and the sound is good for a tablet with stereo speakers that has Dolby Atmos audio technology.

The thickness is 7.7 mm, and the weight is just 432 grams. That makes it the third lightest 10.1-inch Android tablet on the market today, about 20% lighter than the average weight of its competitors, only beaten by the twice as expensive Sony Xperia Z2 Tablet at 426 grams, and the Sony Xperia Z4 Tablet at 389 grams.

Ports and sensors include a microSD card slot, a micro-USB 2.0 port, a 3.5 mm audio combo jack, microphone, accelerometer, and gyroscope. Color options are black and white and amazon have even made a keyboard case

for the Fire HD 10 with trackpad/touchpad.

I think the Fire HD 10 is a enjoyable tablet, but there is the issue of the price. Because unlike the 7-inch $49 Amazon Fire or the $149 Fire HD 8, the Fire HD 10 costs more and also has some very significant rivals. So the Fire HD 10 is to a large extent a 10.1-inch tablet for someone who wants to use it to engage with media content from Amazon, and also use it for emails, social media, web browsing and video chats.

But for those who wants a stock Android 5.0 Lollipop tablet instead without Amazon’s Fire OS and all the associated services and features, there are two competitors / alternatives to Fire HD 10 that are worth a look.

The first one is the recently launched Asus ZenPad 10. A tablet with a launch price of $179. But even if it’s a new Android 5.0 tablet, it’s not as powerful as the Fire HD 10 and it also seems to be failing more than it should.

It has the same Dolby Atmos audio technology as the Fire HD 10, but the speakers are hidden behind a very cool looking perforated sound bar on the back. It has a very long battery life too, which is convenient if you use the tablet a lot out of your house.

Other than these two tablets it’s been a long time since new 10.1-inch Android tablets at lower prices than the Fire HD 10 were launched. So for those who want twice the resolution, RAM, and other hardware specs, it’s also going to cost twice the money or more.