Acer have announced that the 13.5-inch Windows 10 2-in-1 tablet Acer Switch 7 Black Edition will get Amazon Alexa too in the US during the first quarter of 2018:
https://www.acer.com/series/switch7blackedition

So now users can chose between Alexa and Cortana on the tablet. Acer says that a wider rollout of Amazon Alexa can be expected from mid-2018, without specifying what other tablets that may become eligible for the update.

Part of the reason why the Acer Switch 7 Black Edition will be first of Acer’s tablet to receive Amazon Alexa is not just because this is Acer’s flagship tablet, but also because it has Intel’s Smart Sound Technology with integrated audio Digital Signal Processor which responds better to voice commands than mics and audio cards without this technology does. 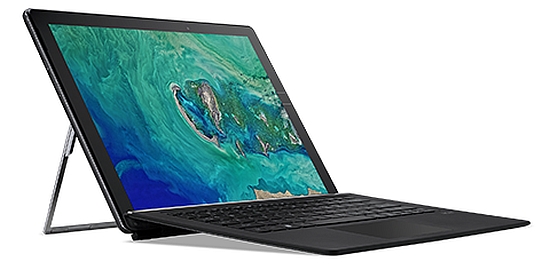 All Acer have to now is to actually release the Acer Switch 7 Black Edition. It may have been unveiled on August 31 last year, but Acer still haven’t released it. I do not know why, because the processor is only a 8th gen. Intel Core “Kaby Lake-R” i7-8550U processor which I don’t know of any shortages of.

Acer had originally announced a December 2017 release for the North American market. But it may still be here soon, and we would then be looking at a 13.5-inch tablet with built-in kickstand that features a decent 2256 x 1504 resolution, 16GB LPDDR3 RAM, 512GB SSD storage, a Nvidia GeForce MX150 GPU, and a 10 hour battery life.

For a price of $1699, Acer’s flagship tablet is to be sold with the keyboard and pen included.