Acer finally unveiled the Iconia B1 (B1-A71) at CES 2013 on January 7. Surrounded by rumors for months, the Acer B1 was expected to be a real cheap tablet with decent specs.

[UPDATED: Acer Iconia B1 is released in US]

By Tom Bowen – Now that we have the specs, we are just waiting for the specific price and release date. Acer has so far only said the B1 will be released mid-January in Europe, Asia, Middle East, and Africa, and that the price will be less than $150.

For US consumers looking to buy it, it is available on eBay in India for 7866 Indian Rupee, or about $145. For that amount, the Lenovo A2107

is the closest tablet in terms of price (see tablet comparison for prices).

With nothing more to show for than a 1.2GHz processor and a 1024×600 display, the competition is fierce now that other 7-inch tablets are expected to pack at least 1.6GHz processors at the beginning of this year. In addition, Acer also released another 7-inch, Android 4.1 tablet 2 1/2 months ago, called Acer Iconia Tab A110. But at least the Iconia B1 offers consumers more choice.

Acer stated in their press release that the B1 is “Ideal for first time users or families opting for a 2nd tablet for their children”. 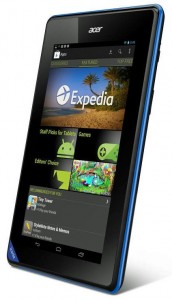 Acer Iconia One 7 Leak Ahead Of Unveiling