About 6 hours ago the first benchmark test for the next 2015-2016 Amazon Fire 7 budget tablet surfaced online from GFXbench.
http://www.amazon.com/dp/B00TSUGXKE/

(UPDATED: The new $49 Fire 7 tablet was announced online by Amazon September 17, and will be released on September 30 after taking pre-orders first.)

The tablet appears to be the cheapest $49 / $50 Amazon Fire tablet we wrote about a few days ago, the new cheap tablet in the Fire family.

Some GFXbench specs are approximate and doesn’t always reflect reality, though most appear to be more or less correct this time. The new cheap Amazon Fire tablet is listed with specifications such as Android 5.1, a “6.7-inch screen” with 1024 x 600 resolution, and a 1.3 GHz quad-core MediaTek MT8127 processor with Mali-450 MP4 GPU.

Then 0.8GB of RAM, 5GB of storage, a 0.3MP front camera, a 1.8MP rear camera with flash, face detection and HDR photo, as well as accelerometer, barometer, and Wi-Fi and Bluetooth. If we round off these figures then almost all the specs are similar to that of the current Fire HD 7 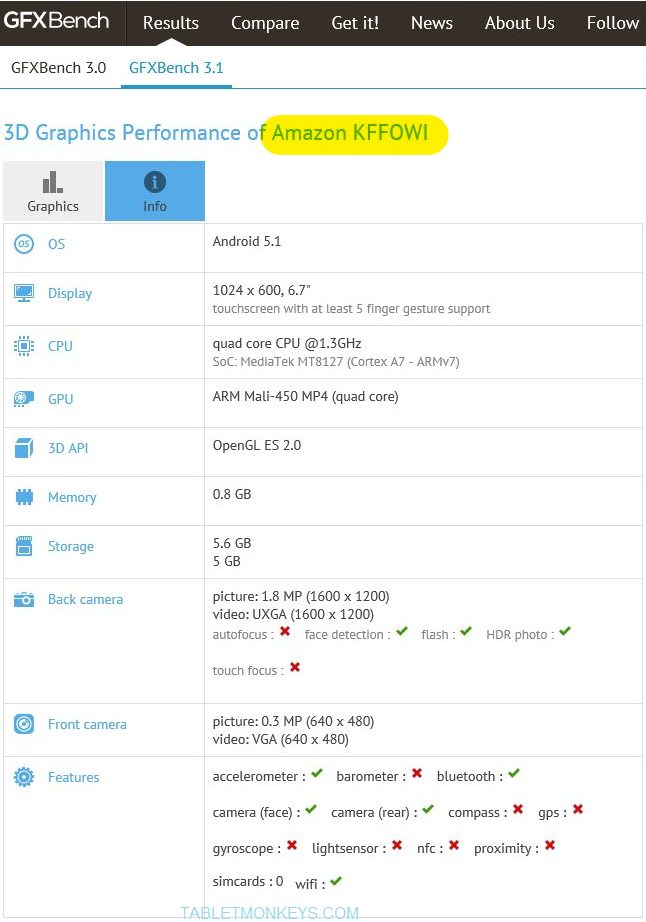 The codename of the tablet in the benchmark is “Amazon KFFOWI” and is consistent with Amazon’s code names from previous years. The MediaTek MT8127 processor is powerful enough to power large Full HD tablets like the Acer Iconia Tab 10 A3-A20 FHD.

And as our observant readers will notice we experimented with the use of the new Microsoft Edge highlighter from Windows 10 in the “Amazon KFFOWI” screencap today.